Superqueeroes… and Other Writing News

I’ve just completed my first short story in about four years! It’s a superhero story for an anthology with the tentative title of Superqueeroes. Will found the call for submissions a couple weeks ago and I wrote most of the story last Thursday and Friday. I just put the finishing touches on it this morning. It will go into the mail over the weekend after Will gets the final read on it (and thanks to Dave for taking the first pass on editing it). Wish me luck getting it accepted.

It feels so good to write again. The last short story I did was for The First Line before Dave and I stopped writing for the magazine to just focus on the editing. I’d forgotten how much I enjoy story creation. Will found a couple other calls for submission that are due over the next couple of months and I’m going to try for some of those as well.

What is even more fun is that Will and I are both trying to place stories in some of these. It would be very cool for both of us to get in these (although we’d be happy if just one of us got in too… we’re not in this for competition after all).

Meanwhile, I’m working on a second draft of Neutral Zone, the novel I wrote during NaNoWriMo. I’m reworking a lot of it because having read it over recently, it definitely had shortcomings. But the work is going pretty good in terms of fully mapping out characters and plot. I should start actually writing on the manuscript again sometime in February.

And in a completely unrelated note to the subject of this post, it snowed this morning! There isn’t much, and there isn’t expected to be, but it did leave a dusting on the ground. Yay! Here’s a picture I just took from our 11th floor window down into our building’s courtyard. 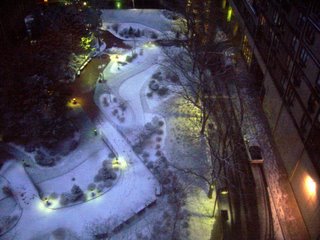