I’ve had big news for about 10 days now, but couldn’t share it with the blog audience. I suppose that’s one of the hazards of the blog. You’ve got news you’d tell a lot of people you know, but sometimes you can’t post it out in the big public space because there is still some sort of embargo on the news. Well, the embargo is officially over today, so now everyone can be in on the news.

Last Thursday afternoon I resigned from The Princeton Review and September 14 is my last day there. On Tuesday, September 18 I will start with Corsis, a web development firm here in NYC. I’ve worked with Corsis on some projects at TPR, so I already know the good work these guys do and it was the reason I inquired with them about what sort of people they look to hire. The timing was good because they had an opening that was exactly the kind of thing I was looking for. After seven years at TPR, it was time to look for some new opportunities, different kinds of projects to work on and a different company to learn some new processes from.

It’s odd to be leaving TPR after so many years. Typically I’ve shifted jobs on average of every 5 years, so this job lasting seven is abnormal in my career so far. I’m going to miss a lot of the people I’ve worked with over the years. I won’t quit TPR cold turkey since I’m going to help out as much as I can with some of the projects I’m leaving in progress. Meanwhile, the Corsis gig is going to be very cool. I already know some of the initial projects I’ll be working on, and I’m very excited about it. 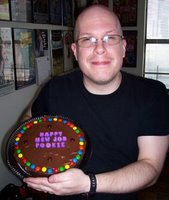 Will and I have been celebrating the new job for about a week now, on and off we’ve been doing things here and there. For the long Labor Day weekend, he made me a brownie treat to congratulate me on the new job. He even took a picture of me showing his handy work, which I have placed here (as I promised I would) even though I think it’s a dorky picture of me. The brownie was very yummy… and since he doesn’t eat chocolate I got to eat the whole thing.

Anyway, I’m sure I’ll write more about the new job as it gets going in a couple weeks. In the meantime, I’ve been like a kid getting ready for school. Since my laptop and Blackberry were TPR-provided, I’ve picked up a laptop and a Blackberry (yes, I got hooked on its convenience) for myself.