The Straight Road to Kylie by Nico Medina 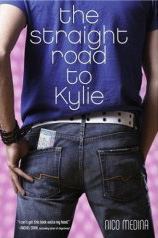 I started the first morning of 2008 finishing off The Straight Road to Kylie, Nico Medina’s debut novel that came out last spring. It was a good way to start of the new year from a reading perspective.

I admit, I was dubious of this novel for the first few chapters. The story revolves around Jonathan Parish, an out senior at Winter Park High School. Within those first chapters he manages to have drunken sex with a girl and ends up making a deal to become the boyfriend of the most popular girl in the school. Yes, he decides to go back into the closet because the girl promises him a trip to a Kylie Minogue concert in London. I found this premise disturbing because I wasn’t sure about the message this would send to the readers… after all, going back into the closet for any reason isn’t a good message.

What kept me going, even while I was unsure I was going to appreciate the ending, was Jonathan’s voice. I loved how his thoughts, feelings and actions sprang off the page. I often felt like I might be sitting in a cafe and getting this story directly from the character. I love it when an author can make a character’s voice so loud and clear. I need to find this sort of clear cut voice for Neutral Zone (in fact I think Straight Road… is the tipping point that’s going to find me rewriting the third draft and shifting to first person from third).

And I’m glad I kept reading, by the half-way point in the book it was clear that Jonathan was having the same misgivings about his situation that I was. His friends were also all telling him that going straight for a concert was not the best choice (even if it was for Kylie). It turned into a great story, with very satisfying outcomes (including unexpected twists) all the way around.

I’m already looking forward to Medina’s next book, due out this spring, called Fat Hoochie Prom Queen (talk about a great title!)

Up next: I’m going to read one of the books Will got me for Christmas: J.L. Langley’s The Broken H.