Single Frames of One Magic Night…

…forever flicker in close up on the 3D IMAX of my mind. – Mark Cohen, Rent, Act II

Since Rent announced its June closing I’ve been considering whether or not to go back one last time. When I saw the show back in August it had the original Mark (Anthony Rapp) and Roger (Adam Pascal) back in it. It was a perfect show and could’ve been a perfect way to cap 12 years and 11 times to see Rent.

But then I hatched a plan. In those years, I’d never won the $20 lottery for tickets in the first two rows. So tonight I went out to play the lottery, for the first time since I had the idea. The theatre is just four blocks from the office so I zipped over at 5:45 and, shockingly, by 6:04 my name was drawn and I had a ticket in the front row on the right side! I was giddy with excitement!

The show was great. Tamara Gray was in as Mimi, like she was in August. Michael McElroy was in as Collins and he nailed the “I’ll Cover You” reprise at Angel’s funeral. The guys playing Mark (Declan Bennett) and Roger (Harley Jay) were great too… in fact Mark was the cutest Mark ever. All in all, the cast was very good, no clunkers to report. It was so cool from the front row. I’ve sat in nearly every section in the Neaderlander and this was the best to be right there…at times I could have touched the actors.

The big question now is that since I got in in February, do I try again before June? Gotta think about that because this one was as good as I think it can get short of the original cast showing up. 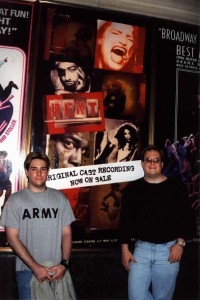 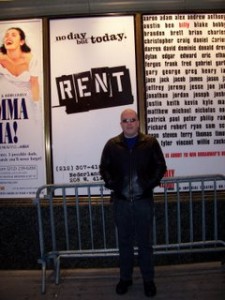 One more bit as Rent prepares to close… a picture we took in September 1996 when we were in NYC to see it the first time (on the left). And me shot just this month (on the right)… Both were shot in Shubert Alley, just many years apart.