The First Rule of Fight Club 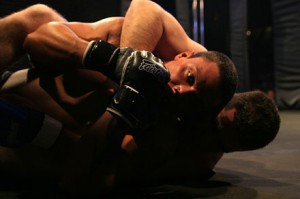 Apparently this is a rule that Will over at Soliloqueer chose to ignore.

Last Monday morning I’m sitting at work and an IM from him pops up. We exchanged good mornings and then he dropped the bomb that he had a black eye. Well, Will just isn’t the type of person to end up with a black eye, so I needed details. Turns out the night before he’d met up with a friend of his and went to a real life fight club, though no where near as brutal as the one from the movie. Still… this wasn’t something I’d expected to hear from him.

I thought his story was very cool though. I admit I love the jostling and bumping and physicality of hockey and I do get my fair share of bruises and other damage. When I asked my Will if I could try fight club, I got a very solid and firm “no” since he felt that I got hurt enough playing hockey. Oh well, I’ll live vicariously through Will’s stories.

You can check out Will’s four part fight club story over at Soliloqueer.