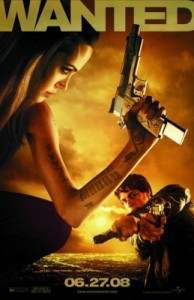 Let me start by saying that Wanted has one of the most ridiculous plots that I’ve seen in quite sometime. A bunch of super assassins, part of a organization called “The Fraternity,” strive to make the world a better place by taking orders from a loom that’s controlled by fate. Yes, you read that right… the killings are based on instructions encoded in the weaving of a loom that we’re told is controlled by fate.

I loved the film.

While the plot is hokey, the execution is very good. While the visual effects come from The Matrix school, these are original and in some cases move the effects art to the next level. The acting is also top notch. How the filmmakers managed to get James McAvoy (Golden Globe nominee), Morgan Freeman (Oscar winner), Terrence Stamp (Oscar nominee) and Angelina Jolie (Oscar winner) to all have lead or major supporting roles in a movie that could’ve been populated with B-level (or lower) actors is impressive. They all lend crediblity to the proceedings and make you believe in the plot as it unfolds.

Two trailers that we saw look like possible movies to see soon: The X Files: I Want to Believe and The Mummy: Tomb of the Dragon Emperor. I’ve been leery of the X Files film because of how bad the series was by the time it ended. But this trailer looked good, so I may give it a go. I was also not psyched for a third Mummy film, but Jet Li and Michelle Yeoh being part of it bumped it up the list of movie going possibilities. (One question I have though: How did Brendan Fraser manage to have two action/adventure films out with in four weeks of each other this year?)