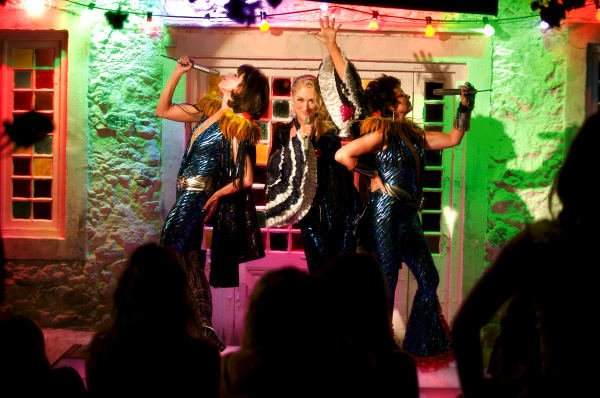 Mamma Mia the movie suffers the same problem as Mamma Mia the stage show. The plot, while thin, could make a cute romantic comedy. However, the ABBA songs are crowbarred into the plot in ways that are mostly ludicrous and inhibit the plot.

I saw the stage show shortly after it opened in the fall of 2001. I didn’t really enjoy it, although the songs were performed well and it was amusing seeing how the songs were jammed into the plot.

As a film, this works much better. The musical performances are more like individual music videos and they are fun. Not to mention the fact that you’ve got Meryl Streep, Pierce Brosnan, Christine Baranski, Julie Walters, Colin Firth and Stellan Skarsgård singing the songs. To be honest, Pierce and Stellan probably shouldn’t be singing. Meryl, Christine and Julie are pretty awesome though and Colin Firth holds his own in his one solo moment. 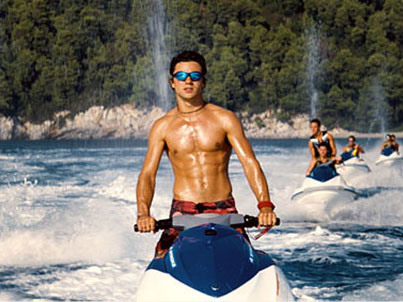 It also helps that the younger cast members are extremely hot, such as Dominic Cooper who plays the groom-to-be.

Among the numbers (or music videos if you’d prefer), I loved “Money, Money, Money” with Meryl on a boat with flowing fabrics. “Dancing Queen” as a huge group number was great fun (great to see ABBA’s Benny Andersson in a quick cameo here on the keyboards). “Lay All Your Love on Me” between a shirtless Sky and his love was beachy fun. “Slipping Through My Fingers” between mother and daughter was a great scene between Meryl and Amanda Seyfried (“Slipping” is also the only number in both versions of Mamma Mia that actually drives the plot). And, the credits aren’t to be missed either with a bring sparklely finale, along with a cameo by ABBA’s other B, Björn Ulvaeus. And when it’s all over, you will never look at Meryl Streep the same way again.

Overall, the movie met my expectations. It’s unfortunate that the creators of the stage show were given such free reign over the movie (same director, same writers). In someone else’s hands this might have been so much better. But, it was well worth the price of admission to see more than a dozen ABBA songs played out against a gorgeous Greek backdrop by such great actors.