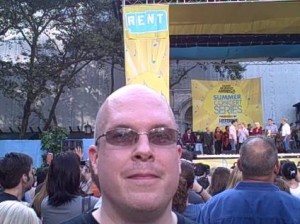 That was fantastic. I got to the park around 6:40 and was able to get pretty close to the stage. A little after 7 they started doing sound checks with the band and the cast. Adam and Anthony goofed around during theirs and that was fun to watch. The did two of their typical songs: “What You Own” (Adam and Anthony) and “Seasons of Love” (entire current cast). “Seasons” was different though because it took not only the main song but the two reprises and made it into one complete song. That was awesome!

After the broadcast, they shot a bonus track of “Take Me or Leave Me.” It was great to watch Tracie Thoms and see what she’s like as a member of the Broadway company. She was solid!

I shot a bunch of video. Since I was closer to the stage, it looks a lot better than what I’ve shot at the Thursday concerts. Once i get it edited and up on YouTube, I’ll post it here.

What a great Friday morning!

Posted at 4:30am:
Okay…today’s Geek Out hasn’t happened yet. Between 8 and 9 this morning, the cast of Rent performs as part of Good Morning America’s Summer Concert Series in Bryant Park. I’m outta here in about two hours to get to the park to wait (in hopefully a good spot). I don’t know what they are going to perform, but I know the current cast will be there along with the original Mark and Roger–Anthony Rapp and Adam Pascal. Plus, the current company includes Tracie Thoms, who played Joanne in the Rent film. She just joined the final company this week and it’s going to be great to see her in action.

Needless to say it’s going to be a great way to start Friday. More to say on this (with possibly my own video) later in the day.

Only five weeks to go until Rent is no more…