It’s been a pretty relaxed day. We got up late, if for no other reason than we could. We decided to head into to town and grab a little education, so we checked out the Pilgrim Monument, which is the tallest all-granite structure in the U.S. (it’s 252 feet, 7.5 inches). Why is there a Pilgrim Monument here? Ptwon is the first place the Mayflower landed. The Pilgrims didn’t stay long here since there wasn’t much tillable soil or fresh water… so off to Plymouth they went.

Anyway, there’s a museum at the base of the monument that has Provincetown history, the history of the monument and other odds and ends about the city’s founding and famous people who have lived here.

The monument was cool. We took the 10 minute walk up it, which involved climbing a series of stairs and ramps. You get some truly spectacular views over the Provincetown area. It was also our first clue rain was coming because from up there you could see the angry clouds coming in from the east. Odds are, because of the rain, we stayed in the museum longer, which is fine because there was some pretty cool stuff in there too, especially on the town’s history as an artists colony.

Here are some pictures from this morning, including the Pilgrim Monument (including a night shot from yesterday) and the museum. (Just click on the thumbnail to view a larger image…)

After lunch with A.J., Marc and Mark we went back to the gallery we were at yesterday to get pick up the Steve Walker art we wanted. We took the plunge and went for both pieces. They are signed, numbered reproductions on canvas and now we own them. They’re being shipped home for us, so we’ll have them next week. Here’s what we bought: 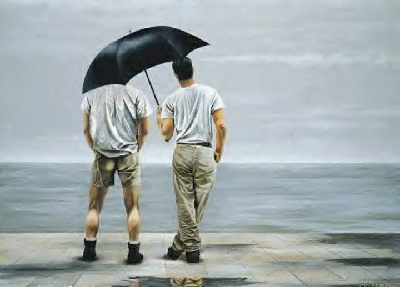 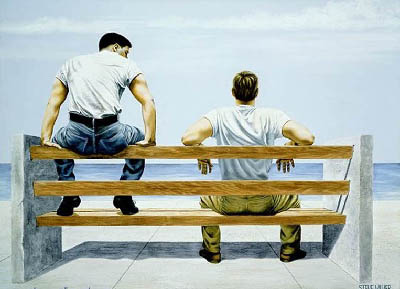 On A Clear Day

Why did we decide to go for both? Well, Jeff really like “Rain” and Will really likes “On A Clear Day” and so why not get both so we each have our absolute favorites!

We also picked up a print from Michael Breyette, an artist we also found on book covers. We both really liked this one, it’s very New York… and since we were splurging on art anyway, we decided to go for it too. 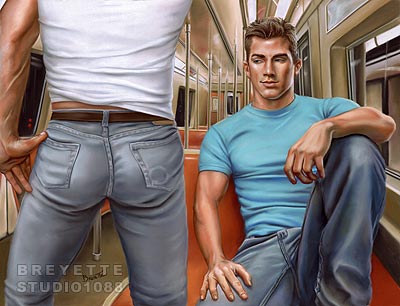