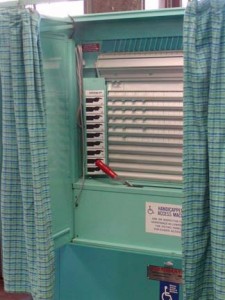 During the past few elections there’s been a lot of talk about the electronic voting machines that are being used more and more. Ignoring for a moment the issues around the security of these machines, I have to say I’m not interested in using them… And this from a guy who likes technology.

There’s something very satisfying about using old school voting machines. They are still used in NYC, in fact I used one this morning. The exercise of stepping behind the curtain, siding the big red handle to the right, flipping the small levers down and then moving the red handle back top the left is enjoyable. That nice “ch-chung” sound as the lever moves and flips the levers back up says that you’ve done your civic duty. The sound also makes you feel like the machine recorded the vote too.

These machines also bring back childhood memories. For some reason I can vividly remember going with my mom to vote when I was five or six. I always wanted to move the red handle, which I wasn’t allowed to do because I wasn’t the one voting. It was all so official.

Today’s vote also flooded back memories of the 2001 primary election. I voted on the way to work that morning too. Of course it was within a couple hours that everything changed in NYC and across the country. The September primary always carries that memory, even when that particular day isn’t 9/11.

The seventh anniversary is Thursday. I hope you’ll take a moment that morning to say a prayer for peace.

And, hey, make sure you vote today too! Primaries are just as important as the November election.