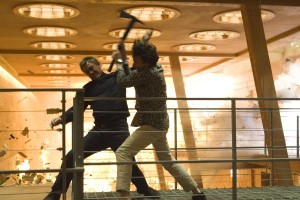 After the thrilling Casino Royale, Quantum of Solace came up short. It failed to live up to the promise that the first Daniel Craig film made about what the future of James Bond would be.

Craig is still great as Bond, but the story let him down. The plot about getting a dictator in place, hording water and all that was muddled. The revenge over Vesper’s death in Casino Royale was in and out of focus–and to me not fully resolved since they guy Bond captured at the start of the film was still on the loose at the end (unless I just missed something).

The action sequences in this film too are a little too Bourne for me. It’s all to close, to rapid cut, making it hard to really enjoy what’s happening. The Bourne films do this well… this Bond film, not so much.

And I hated the theme song. For decades the theme songs have been just as important as the films. “Another Way To Die” by Jack White and Alicia Keys is dreadful. Casino Royale’s was no good either (“You Know My Name” by Chris Cornell in case you’ve forgotten). At least Quantum’s opening titles were more in the traditional format. I heard that producers initially asked Paul McCartney to do the song for Quantum. McCartney, of course, has the classic “Live and Let Die” under his belt and maybe he knew better than to try and top that. Regardless, the producers need to get back to classic Bond themes because the last two have sucked big time.

All in all, it was a watchable hour and forty minutes, just a disappointment given what it could have been.