Friday Geek Out: A Wish for Wings That Work 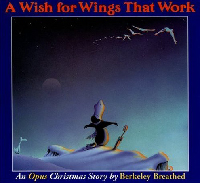 One of the things I loved about the 80s was the Bloom County comic strip by Berkeley Breathed. The strip ran for most of the decade and featured human characters Steve Dallas, Cutter John Milo Bloom and Michael Binkley as well as animal characters Opus the Penguin and Bill the Cat (Bill and Opus moved on to Outland in 1989 after Bloom County was retired). In ’87 the strip won the Pulitzer Prize for editorial cartooning, which just shows how excellent the strip was.

In 1991, Opus appeared in his own children’s book: A Wish for Wings That Work: An Opus Christmas Story. Opus wants new wings for Christmas because he longs to fly (he’s got “the flightless earth-bound blues”). Ultimately it’s his skill in the water that saves the days when Santa’s sleigh crashes into a lake. Of course, this good deed gets Opus his wish, after a fashion. That same year, the book was a TV special on CBS and it was magical.

Through the magic of YouTube, here are the three parts of A Wish for Wings That Work (parts two and three are after the jump). Enjoy this holiday treat with Opus and Bill.