“What They Always Tell Us” by Martin Wilson 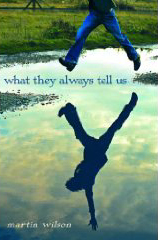 I started off 2009 with an amazing book. What They Always Tell Us by Martin Wilson was a fluke to pick up at the bookstore. The cover drew me to read the jacket blurb from there I was hooked. A coming of age story about two brothers in Alabama. I’m game for that having done the majority of growing up there myself. Then I read the author’s bio and discovered that Wilson also grew up in Tuscaloosa. Well that sealed the deal. In between buying the book and reading it, I also found out via Wilson’s website that he went to Central High School just like I did and that the book was set at in Tuscaloosa and the school.

The book centers on James and Alex Donaldson during most of a school year, opening in November and running through June. For James it’s senior year and he’s stressed about getting into Duke. Alex is a junior and has just returned to school from a suicide attempt where he downed some Pine-Sol at a back-to-school party in September.

The brothers are estranged because of Alex’s “incident” and struggle to find their way back to the closeness they had. Alex also struggles to find his place at school. His friends shun him and he’s become mostly invisible. It all changes though one day while he’s out for a run and passes Nathen, a friend of James’. Nathen was always nice to Alex, but now reaches out to him as a friend and encourages him to try out for the school’s cross country track team. Over the months of training, Alex and Nathen draw closer together, ultimately becoming secret boyfriends.

There’s an interesting subplot here too with a boy and his single mom who live across the street from the Donaldsons. The neighborhood is full of gossip about where she’s come from, how she can afford that house and who exactly visits under cover of darkness. While both brothers befriend the boy, the mystery around their neighbor is the first thing that helps bring them back together.

Reading this brought on a major case of déjà vu for me. Wilson set the book in the Central High of my high school years, before it was torn down and rebuilt a few years ago. I knew every bit of the school that he talked about, right down the uncomfortable seats in the cafeteria. The same goes for the Tuscaloosa setting. The LaQuinta Inn in the first chapter, the layout of the subdivisions around the golf course, the Burger King everyone hung out around, the University’s rec center, the “older mall, the one with no good stores in it anymore,” and the Cypress Inn restaurant.

The other thing than the book brought to mind was that I felt a lot like Alex did. This is how Alex recalls the choice to drink the Pine-sol: “He remembers being in the bathroom, feeling a tremendous ache. It was an ache that had spread through his body that summer, growing and growing. It was an ache of emptiness. Something was missing. Something that other people seemed to have without even realizing they had it. Alex couldn’t bear a future if it meant living with this feeling, day in and day out. He didn’t think the ache would ever go away.” I remember that ache. It started in high school and grew in my early college time before I got rid of it. I didn’t go as far as Alex did, but I do remember the feeling and the book captures it eloquently.

One other note about this book that has nothing to do with plot. Wilson gives an acknowledgment to Janice Winokur listing her as one of the teachers who “inspired and nourished my love for the written word.” I had Mrs. Winkour for English in the 10th grade. She honed my love for writing. She gave me my love of Shakespeare (I still remember going on a field trip to see Comedy of Errors) . She encouraged me to join the school paper. She was a teacher that made a differnece.

This is Wilson’s first novel and I look forward to reading whatever is next from him. I’d really love to see a sequel to this because I’d like know see what James, Alex and Nathen are up to.

Next up: A diversion into hockey romance: Power Play by Deirdre Martin.