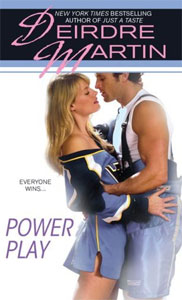 It’s sad when one word destroys the reading experience. Unfortunately, that happened with Power Play by Deirdre Martin.

I was enjoying this seventh book in Martin’s New York Blades series (and the first that I’ve read). The story focused on a new member of the Blades, Eric Mitchell, who falls in love with daytime TV star Monica Geary. Like any good romance novel there were  starts and stops to the relationship, but it was a fun, quick read. There were good subplots too as Eric and his twin brother (and teammate) helped their parents keep the family farm in the family and Monica made peace with her cantankerous acting teacher/mentor/friend.

So how did it all go so wrong? On page 233 (only about 70 pages from the end) Eric and his brother Jason were talking about how much Eric missed Monica. When Jason told Eric that he was available to talk anytime, Eric’s reply was “Don’t be a fag.” That sort of language wasn’t used before that and held no real plot point here

Given no plot point behind it, I was angry to encounter that language. I dropped an email to the author last night and my anger didn’t subside with her reply. She cited that in her research she found that NHL players often speak that way. I don’t know any NHL players personally, but I’ve been around hockey enough to know that that’s unfortunately true. Just because it’s true, doesn’t make it right.

Still, there are dozens if not hundreds of put downs a guy can use on his brother, so why did she feel the need to go with the homophobic one and one that could offend a segment of the audience? She closed her email to me saying this: “I understand how it might offend people, but that’s a risk I have to take in making my books as real as possible.”

Interesting response. I doubt anyone would’ve thought the book was inauthentic if she’d skipped using the word “fag.” Further, if she’s after realism, then why are there other lapses in realism? She uses “NHL” in the book and then doesn’t use names of NHL teams. That was a pretty big distraction for me from the get go. Either use real team names, or create a fictional league… don’t mix the two. Also, the book was set in NYC, so one would expect the team to play at Madison Square Garden. In another departure from realism, she constantly refers to the arena as “Met Gar.” Huh? In a decade of living in New York I’ve never heard that term–it’s MSG or The Garden or Madison Square Garden. Using “Met Gar” just makes it look like a consistent typo.

So I can’t recommend this book, which is too bad since it was pretty good. I’m certainly not going to pick up any of the other books in the Blades series either.

Next up: It’s back to the vampires with book three of the Twilight series: Eclipse by Stephenie Meyer.