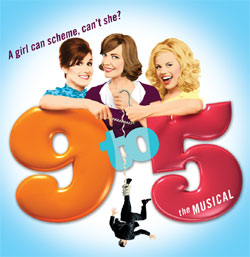 Every now and then a truly good deal happens when a box office opens and I do love taking advantage of them. This morning 9 to 5: The Musical opened its box office at the Marquis and offered 2 tickets for the price of $95 between the hours of 9 to 5. That’s $47.50 per ticket, a nice reduction from the regular $126.50.

Needless to say I made pit stop on the way to work this snowy morning. Now we’ve got tickets for the April 18 matinee in some nice third row mezzaine seats.

We’ve been looking forward to this  musical since it was announced. It is one of our favorite films and the cast assemebled for the stage version is awesome. You’ve got Allison Janney (from The West Wing) in Lily Tomlin’s role as Violet, Stephanie J. Block (Liza Minnelli in The Boy from Oz) in Jane Fonda’s part as Judy, and Megan Hilty (most recently from Wicked) in Dolly’s role as Doralee. One of our favorite leading men, Marc Kudisch (Throughly Modern Millie and The Wild Party among others) gets the Franklin Hart role.

And, of course, the music is all Dolly Parton’s. She’s written the complete score for the show, with, of course, “9 to 5” as the centerpiece. The book would seem to be in good hands too since it’s written by Patricia Resnick, the writer of the film. You also don’t get a much better director than Joe Montello.

Now that we’ve got our tickets, we just have to wait a few weeks before we get to dive in and see how this great movie comedy translates into a stage musical.

You can find out more about 9 to 5 on its website. While you’re there check out the free download of  “Get Out and Stay Out,” one of Judy’s songs.