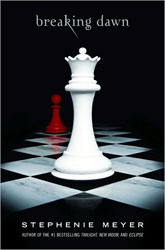 I am so happy to be done with Breaking Dawn, the final book in Stephenie Meyer’s Twilight series. I felt like it took forever to get through it, mostly because Meyer stretches stuff out far too long. It’s like she wants to be J.K. Rowling, but she’s just not. The pacing in this book was atrocious. A good editor could’ve knocked at least 100 pages from this book, kept the story in tact and probably made it a lot more powerful too.

All that said, I did enjoy the plot (spoilers ahead so beware if you haven’t read this yet). Bella marrying Edward was a given. In fact I’m sure how this book was marketed in a way to make people thing she could pick Jacob. The wedding was great as was the honeymoon. Now, Edward being dead, I’m really not clear how he fathered a child and it’s never really explained fully how it’s possible. Unfortunate, it takes all kinds of forever to give  birth to the child, even though it’s an accelerated birth. This was the most painful part of the book. The only saving grace here was most of that was from Jacob’s perspective, and that was fun to see after getting teased with his point of view at the end of Eclipse.

So Reneesme is born, but then there’s the fear that she’s an immortal child… and that’s bad as we know from a previous book. Know it takes more of forever to get to the final battle showdown. Again, editing is a good thing! The final showdown is actually anticlimactic, as previous encounters with the Volutri have been. The thing that annoyed me in the final pages is that apparently Jacob and his pack aren’t werewolves at all, but shapeshifters. Why bring that up so near the end (unless it’s to setup a set of spinoff books on the shapeshifters)? It’s ultimately rather throw away information that’s not revisited after it was tossed out there.

Finally, the foursome–Bella & Edward and Jacob (having finally imprinted) & Reneesme settle in for their eternity.

Overall, I am glad I read the series. It wasn’t Harry Potter by any stretch, but it was entertaining. I’m looking forward to seeing out it will all play out in the movies over the next few years.

Next up, Power Play by J.M. Snyder.