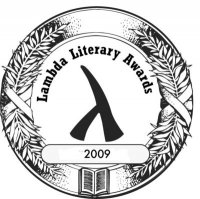 The 2009 Lambda Literary Awards (The Lammys for short) are at the end of this month. To celebrate, a number of authors read tonight at The Center in a showcase of some of the best LGBT literature around. I’m glad I braved the rain to hear some excellent work in a variety of genres. Here’s who read tonight:

Nancy Agabian, Me as Her Again: True Stories of an Armenian Daughter, LGBT Nonfiction. Agabian kicked off the reading with a segment from her book about an Armenian growing up in Hollywood, not quite realizing it was Hollywood. I liked this piece a lot.

Daniel Allen Cox, Shuck, Gay Debut Fiction. This was a quirky piece about a street hustler who lived in the stock room of an upscale store. As he said, where else could i eat cereal out of a different pump every day of the week.

Bill Konigsberg, Out of the Pocket, LGBT Childrens/Young Adult. This book is on my reading list and hearing Bill read some of it, I’m going to have to move it up. The book centers on a high school football quarterback who is gay, but hasn’t told anyone yet. The bit he read was hysterical: The QB and his best friend (a girl) at a 50s diner talking…but also slipping in and out of 50s personas, which apparently these two do just for fun. It was also great to meet Bill, a Facebook friend, in person.

Bob Morris, Assisted Loving: True Tales of Double Dating with My Dad, Gay Memoir/Biography. This was funny. Morris recounted who he helped is 80+ widowed father get back on the dating scene and how his dad often had better luck dating than he did.

Shawn Stewart Ruff, Finlater, Gay Debut Fiction. I was very intrigued by this story set in the 1970s about a 13-year-old African-American boy’s coming of age in a household that was not an easy place to be.

Vanda, Vile Affections, LGBT Drama. We got a scene of this play courtesy of four actors who came along to bring life to the script. This was compelling, sort of in the vibe of Doubt, with an investigation centered in a church.

Meri Weiss, Closer to Fine, Lesbian Debut Fiction. I loved the segment Weiss read about a song coming out at the dinner table. It was very clever and witty. I need to find out more about this book because I think it’s one I should pick up.

Martin Wilson, What They Always Tell Us, LGBT Childrens/Young Adult. Of course, I’m already a fan of Martin’s. He read  a great passage tonight, the one where Alex fully understands Nathen’s feelings for him. I knew, because of his Facebook status, that Martin was reading this passage tonight and it’s the reason I made it even with the rain. I have him to thank for getting me out so I could hear all these authors.

Chavisa Woods, Love Does Not Make Me Gentle or Kind, Lesbian Debut Fiction. This was a great piece of one of the stories in this collection. It focused on a young African-American boy coming to a school where he was not welcome, except for a girl who gave up her seat for him…even though she knew it would likely bring her torment.

Magdalena Zurawski, The Bruise, Lesbian Debut Fiction. This was an interesting piece to close out the reading and I didn’t quite know what to make of it: a college student has a strange encounter with an angel and it leaves her changed. She read a bit from the encounter and it was completely fascinating and a bit disturbing.

There were a couple other readings, one  a piece that I really loved…but I don’t know who did it because the author seems not to be on the list, so I need to find out who that was. The other was some poetry that I liked, but didn’t completely understand.

All-in-all, it was a great couple of hours. Now I need to buy some more books!

Thomas Glave, The Torturer’s Wife”, Gay Fiction. I was blown away by this piece. It focused on two men having sex. In each passage you got the point of view from a different man and it really had a lot to say about passion and, believe it or not, racism. The cadence of this piece is amazing and I need to get this book.

Nancy K. Pearson, who read several selections from her book of poetry Two Minutes of Light, Lesbian Poetry. I admit, I didn’t get the poetry completely, but some of the images and word choices I liked a lot.