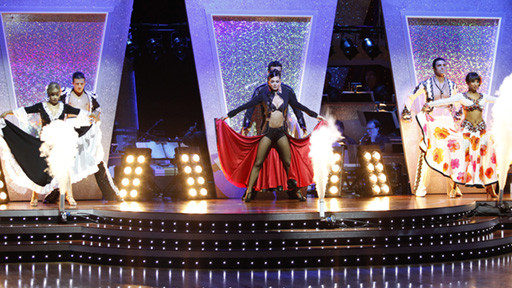 Eleven weeks later, here we are. The finals. I’ll say up front that my ordering for the winners are like this: third goes to Melissa, second goes to Shawn and Gilles gets a sparkly glitter ball to take home.

That show got started with a great idea: a paso doble off. All three did a paso to the same music. But unlike the group paso a couple weeks ago there was very little team here which allowed us to focus on the individual dances.

Shawn & Mark: The paso she did two weeks ago was so good, yes missing some drama but technically and artistically so good. I didn’t get that tonight. She didn’t seem to have the fight down. If she’d had more of the attitude from last week’s Argentine Tango she would’ve been closer to perfection here for me. And that out fit… she looked a little too much like a milk maid.

Melissa & Tony: I, along with Len apparently, saw some missteps here, but this was still really good. In particular the flourishes in the last quarter of dance were stunning. I thought these two also dealt very well with the music, which didn’t seem like proper paso music at all.

Gilles & Cheryl: It was great to see Gilles settle down in his paso a bit and to vary the speeds this time. It was incredible. Cheryl really delivered on the choreography and Gilles delivered on the character of the dance with the sexy aggression.

The group bits of the dance at the very beginning and very end also meshed well. I’m surprised by Bruno though how thought all three paso were perfection. That’s just not so.

The group dance is something I feel is often abused. As I write every season, this is the final exam. You need to show what you learned and make it better than ever before. I go into this with the highest of expectations and usually end up disappointed.

Shawn & Mark: After getting out of those scary initial costumes they moved on to a lot of rapid fire dancing and tricks. In fact, I thought at times that the whole thing was too fast and frenetic and there wasn’t enough dance. There was some gymnastics/cheer looking movies, a lot of tossing each other around, but just not enough true dance content.

Melissa & Tony: I wanted to much more from Tony. His routine, much like Mark’s, was about how much he could throw Melissa around. She performed great and the routine was definitely entertaining, but there just wasn’t enough dance for me to feel like this was a winning final dance.

Gilles & Cheryl: I disagree with Carrie Anne and Bruno on this one. I thought the dance content was pretty much spot on, whether or not you compare it to the other two where it was lacking. Cheryl delivered for the second time tonight because she remembered there was supposed to be DANCE in these numbers. Gilles came through again looking like he was having a blast with the dance.

So I made my predictions up front and we’ll see how it goes tomorrow night. There is dissension in the household as Will thinks the trophy belongs to Shawn and I think it’s Gilles. We’ll see how this all pans out tomorrow (watch Melissa win just to make us both wrong).

Results Update: Well, Will called it right. Shawn won. Do I think it’s right? No. I feel like there was an illegal lift in Shawn’s final dance tonight. Her feet came off the floor when Mark spun her around and I don’t think that’s allowed and some how Carrie Anne (self proclaimed lift police) didn’t call it out. At least it’s not the biggest travesty that DWTS has ever done in terms of final outcome. Shawn, Melissa and Gilles were all very strong competitors.

Lady Gaga was fabulous! I do wish that the pros could’ve danced with her becuase it would’ve been cool to see what they would’ve brought to the floor. In the pro dance competition, it’s no surprise that Anna won.

Now we’re just four months away from starting all over again! To help bridge that time, So You Think You Can Dance stars on Thursday!