So You Think You Can Dance 5 – Top 18 Performances

The judging got a little harsher this week in the second performance episode of So You Think You Can Dance. The two couples that tackled hip-hop this week (Kupono & Ashley and Jason & Caitlin) found that trying to keep up with Shane Sparks isn’t easy. The judges liked the entertainment value of both numbers,  but found the technique lacking. I don’t know enough about hip-hop to comment, but I did find them entertaining.

I thought the judges were a little too gushing about Asuka and Vitolio’s waltz. Don’t get me wrong, it was good… but it didn’t move me. What did move me this week is the contemporary piece Jonathan and Karla performed. The song, “Falling Slowly” from The Frames (the Academy Award winning song from the film Once), is a favorite of mine. Stacey Tookey provided amazing choreography and Jonathan and Karla brought it to live beautifully.

I was a bit surprised with the eliminations this week. Ashley I understood, especially because her solo was underwhelming. The guys though were a tough call. Between Kupono and Max I thought Max’s technique would win out, but the judges more went for Kupono’s quirkiness. As a result of the eliminations, next week Kupono will pair up with Kayla in a new partnership.

Lastly, what was up with Cat’s dress. This picture only shows the top of this remarkable disaster of a dress. She needs a better designer! 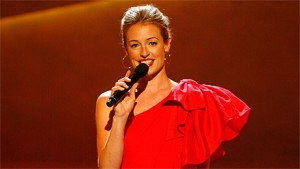