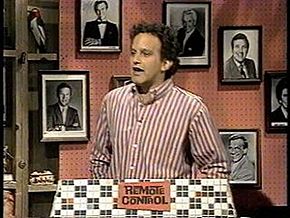 On Tuesday I read that Ken Ober passed away. Ober was host of one of my favorite 80s game shows, MTV’s Remote Control. It debuted in 1987 and I instantly loved it since it revolved around TV trivia, which I have way too much in my head.

Some of the great categories for the show included “The Bon Jovi Network,” “Brady Physics” (which eventually became “Brady Metaphysics”) “Dead or Canadian,” “Leave Out the Beaver” (later “Leave Out Michael Caine”), “Bad TV,” “Celebrity Cellblock,” “Babes and Assassins,” “PhD-TV,” “No Witness News,” “Celebrity Flesh,” and “Inside Tina Yothers” (which later became “Inside Joe Piscopo”).

The game was easy enough. The contestants, seat-belted into recliners, answered the questions in the “channels” in rounds one and two. There was also a “snack break” where snack foods were dropped from the ceiling and the contestants had bowls to catch the treats. After round two, the low scoring contest was yanked through the studio wall. The final two would play out the game, usually with a lightening round to determine the champ. The person left would go on to the grand prize round, played from a bed.

A couple of notable celebrities got their start on Remote Control. Colin Quinn was the announcer/narrator. Adam Sandler (well before he went on to SNL and became famous) and Denis Leary played several characters and wrote for the show.

The show was total fun. Too bad there’s nothing on the air like it now. It was constructed like a classic game show, with a few tweaks (like getting yanked off the set) and the just don’t make game shows like it any more.