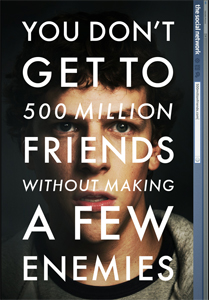 Aaron Sorkin and David Fincher are a match made in movie heaven.

The Social Network combines Sorkin’s excellent rapid-fire dialogue and Fincher’s solid directing style into one thoughtful and entertaining look at the founding of the social phenomenon that is Facebook. It’s amazing that such a good movie comes from the story of the creation of a website. Based on the book The Accidental Billionaires: The Founding of Facebook, A Tale of Sex, Money, Genius, and Betrayal by Ben Mezrich, the story is an intriguing study of how Mark Zuckerberg transformed the internet by allegedly ripping off his classmates and friends.

Of course Sorkin’s words and Fincher’s direction would fall flat without some solid actors in the key three roles in this film. Jesse Eisenberg is a great Zuckerberg as he channels the entrepreneur without impersonating him. This role will likely move Eisenberg into a new level of his career as he makes a pretty unlikeable guy at least somewhat sympathetic. Andrew Garfield plays the betrayed CFO and co-foundder Eduardo Saverin. Garfield, who is set to be the new Spider Man, nailed his scenes and really seemed to mature in his plot going from college kid to ousted CFO out for blood. Justin Timberlake as Napster founder (and Facbeook investor) Sean Parker only adds to his growing resume of film roles.

I was drawn to this film because of Sorkin and Fincher and I was more than satisfied. As a user of Facebook it was interesting to look behind the curtain and the site’s creation. Of course I understand that this is a film and that the story is dramatized to a degree (and in some cases to a huge degree as the book’s author admits) but what’s clear is that Zuckerberg paid millions of dollars in settlements to those who sued him so there’s truth in there. How much I got in the film doesn’t matter since I was very entertained for two hours.