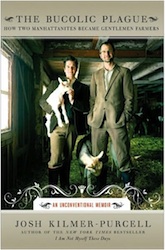 My introduction to Josh Kilmer-Purcell and Brent Ridge came last fall as they started cropping up in the gay press promoting the upcoming premiere of their Planet Green show The Fabulous Beekman Boys. Quickly I became a fan watching these two build a business, Beekman 1802,  selling goat milk soap and goat milk cheese and working to create a sustainable farm that would provide their food as well as fuel the business.

Josh chronicles the beginning of the Beekman adventure in The Bucolic Plague: How Two Manhattanites Became Gentlemen Farmers: An Unconventional Memoir, which takes place over three plus years before the television show began. Josh, an ad exec, and Brent, who worked for Martha Stewart Living Omnimedia and was known on Martha’s television show as Dr. Brent, discovered the Beekman mansion in fall 2006 because they got lost in upstate New York coming back to NYC from their annual apple picking trip. Josh and Brent, who’d been partners for 10 years, fell in love with Sharon Springs and the Beekman on their first visit.

The Bucolic Plague is divided into three sections. The first details buying the farm, making a weekend home of the place, ending up with a heard of goats that came with their own caretaker and getting into the grove of Sharon Springs.  With the goats came the idea of making soap. Some of that first batch of soap went to Martha Stewart as a Christmas gift. Book two starts off with Brent and the goats appearing on Martha’s TV show and that officially kicked off Beekman 1802 as a brand. Josh wanted to be able to leave advertising and live on the farm full time and these seemed like the ticket to get there.  What the two end up doing is spending so much time at their day jobs during the week and so much at feeding the Beekman brand that they almost lose themselves. Book three has plenty of hard times as the economic downturn hits and Brent loses his job at Martha Stewart and Josh’s job is in peril as well. Of course as the economy is rocked, people are also buying less soap.  They are faced with the possibility of having to sell off the farm and losing the still fledgling business.

Through the whole thing, Josh weaves a compelling story of two guys with a dream, some determination and who eek out success where others might have quite. Watching the first season of The Fabulous Beekman Boys you know they still struggle with making it work. Brent is full time on the farm while Josh still holds down is weekday ad agency job. Josh still wants to live full-time on the farm, but he’s the one making the stable income while the Beekman 1802 business grows.

Josh says this in an upfront “Author’s Caution:” “This book is not about living your dream. It will not inspire you. You will not be emboldened to attempt anything more than making a fresh pot of coffee.” I have to disagree with that. Despite the hardships he and Brent faced, and there were many (and still are as the TV show depicts), they persevered and created something great.

One of the greatest difficulties between the partners is that Brent is about Martha perfection and Josh is about Oprah’s best life. I’m giving away a bit of the of the book, but the lesson is important for everyone. Josh points out that he mis-understood the message he heard from the two talk show hosts. Martha isn’t about achieving perfection. It’s about going back time after time trying to get there. Oprah’s best life also isn’t as simple as it seems because it’s not necessarily your favorite life or the one you selfishly want. It’s about living the life you’re best at.

I’m looking forward to keeping up with Josh and Brent and seeing how it turns out for them. The Fabulous Beekman Boys was picked up for a second season, which is currently being shot, so keep an eye on Planet Green for a future premiere date.

It’s been quite the run of inspirational books lately between this and Chris Guillebeau’s The Art of Non-Conformity. In fact, Josh’s experience is right inline with what Guillebeau talks about since Josh and Brent are certainly living a non-conforming life–it’s not everyone who would take on buying a mansion  turning it back into a working farm.