The So You Think You Can Dance Top 20 had another chance to dazzle the audience last night since no one was sent home last week. Of course that means four dancers will get cut tonight (at least in theory) and everyone needed to be on top of their game last night in order to avoid that cut. Two of the three b-boys rose to the top last night with outstanding performances outside their genre–one with a  Viennese Waltz and the other in Broadway. 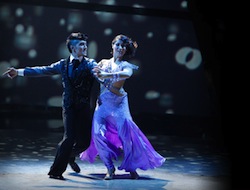 Jordan & Tadd (Viennese Waltz by Jean Marc Genereux) Here’s the first of last night’s remarkable b-boys. The dance was gorgeous with all the rise and fall, beautiful lines and fluid moves you want to see in a Viennese Waltz. Jordan danced as you would expect her to, but the stunner was Tadd. He nailed the choreography and the character. Plus his partnering, and in particular his lifts, were stupendous. It was amazing to see such a transformation happen in week 2.

Sasha & Alexander (Hip Hop by Tabitha and Napoleon D’umo) NappyTabs always deliver amazing choreography (and last night they did it twice). This one rose above though with the emotional performance from Sasha and Alexander. She’s a wife waiting for her husband to return from war and this piece went from a flurry of emotions during the waiting to a full-out powerhouse upon his return. Both dancers were way out of their genres (they’re both contemporary dancers) but they left everything on the floor for this.

Caitlynn & Mitchell (Contemporary by Stacey Tookey): This story of falling out of love was mesmerizing. I’m glad Mitchell got to stick around after his injury last week so we could see what he could really do. Stacey gave them perfect choreography and these two infused the right characters on it to create a beautiful piece of work. 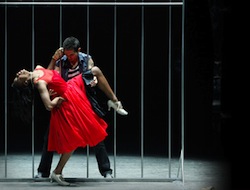 Ashley & Chris (Broadway by Spencer Liff): Chris is the other star b-boy of the night as he took on this rather complex routine that not only made these two partner with each other, but with the bars separating them. Chris did some great athletic work on the bars, but also nailed the Broadway style of the routine overall. Together they had perfect chemistry too, nailing the sexual tension they needed to show. He’s another once to watch over the coming weeks to see how he takes to the other genres.

Yes, that was four in the top three since I couldn’t decide which to leave out. Sadly I’ve got two, rather than one, at the bottom of the pile from last night too:

Clarice & Jess (Contemporary by Stacey Tookey): This was a big failure for Jess. Every time he had to partner with Clarice, especially when he had to lift her, things got awkward. We saw in the rehearsal package that he had trouble with the lifts and it only got marginally  better for the show. (Perhaps he should seek help from Tadd or Chris on this since they are also smaller guys who did do some great partnering). When these two danced apart the piece soared, but having too much clunkiness landed them in the bottom for me.

Missy & Wadi (Cha Cha by Jean Marc Genereux) These two make their second appearance at the bottom of my list. The cha cha did these two no favors. Wadi gave it his best, but the breakdancer continually looked out of his element, and his face telegraphed that. Missy did okay, but overall the piece lacked the speed and fluidity you expect from a cha cha.

Here’s the remaining dances from last night in the order they were performed:

Ryan & Ricky (Mandy Moore Jazz): There were some great moves from the both of them, in particular some of Ricky’s leg extensions. But, in a piece that was supposed to feature a lot of sexual tension, it’s the chemistry between these two that seemed to be missing (maybe they should have taken notes from Ashley & Chris on sexual energy). At times it was like these two were in separate numbers that happened to merge occasionally.

Iveta & Nick (Bollywood by Nakul Dev Mahajan) These two did a solid job on this complicated and speedy number. They did get out of sync a couple of times, but they sold the number by keeping it entertaining and fun. They continue to show great chemistry between the two of them too. I hope this partnership has the opportunity to continue.

Miranda & Robert (Hip Hop by Tabitha and Napoleon D’umo) The idea of woodpeckers sounded silly in the rehersal package, but it made for an extremely strong dance. Robert looked great in his style (although the fact that his b-boy competitors were way outside theirs did diminish this just a bit for him) and Miranda, a contemporary dancer, absolutely nailed this. It was powerful, floor stomping excellent. Robert should be thanked too for uttering not one “wooooo!” last night.

Melanie & Marko (Jazz by Mandy Moore) This was an odd one last night. I didn’t care for the choreography very much. I thought these two should’ve been given more to do. They executed very well, Marko even made an excellent recovery when the hat dropped off his head and he had to get it and catch her. They were quite entertaining too. I hope it’s enough to keep them safe.

With four going out, given that Wadi and Missy have been in my bottom slot for the last two weeks, I’d like to see them go. Jess and Clarice were in the bottom last week on the actual show, so the weak number this week might spell their end as well. I suspect it’s going to be a stressful show tonight!

Results Show Update: Wicked disappointment tonight! Keeping the lackluster, chemistry free pair of Ricky & Ryan and losing Nick & Iveta. It’s one of the worst choices I’ve seen SYTYCD make. They flat out said that Ryan didn’t leave everything on the floor in her solo and yet they kept her…why? It was more of a challenge to pick between Ryan and Nick, but why keep a contemporary when there are so many. Keep the people we can truly watch grow outside of their genres.

Meanwhile, the opening number tonight from Dave Scott was awesome! The kid dance crew was cute. LMFAO was lackluster and felt like it went on too long.