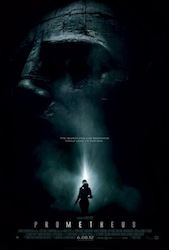 Well, I’m mixed on Ridley Scott’s new sic-fi film (and sort of Alien prequel) Prometheus. There are spoilers coming up, so read on at your own risk.

To hit the good stuff first, I did love the visuals and the 3D. I’m usually skittish of dark 3D movies, but Scott did his homework with 3D and the movie looked good through the glasses. I also liked the action sequences when taken for action sequence sake. They were well choreographed and shot and were exciting. Sadly, one of the many issues I had with this movie was the motivation behind some of the action, which seemed to be left unsaid… just people running off to do things without thinking it through first.

Where the film failed was on story. First of all, when sci-fi goes looking for the creator of man the genre too often falls short. That’s the case here. The doctor’s who get the expedition going expect to find the creators of man. Their benefactor, who turns up along for the ride when most everyone thought he was dead, was looking for that too.

After all the destruction and death by the end of the movie, we still don’t know (or at least I’m not sure) if they found and spoke to the creator or if it was some other alien. They did find some DNA that was a match to humans, but to me it was rather unclear, given everything that was on the planet, which life form they took it from and if they actually spoke to that same life form.

Then there’s the question of resident android David. What was his motivation? He seemed to have programming that went beyond what the benefactor wanted. Why did he infect cute doctor guy? Why was doctor girl’s pregnancy so important? Why did he not seem to care (or notice) that she tried to abort that alien baby? What did he say to the big alien guy that got him beheaded and a number of other people, including his programmer, killed? How did what he was doing connect to waking up the big alien dude? So many questions that don’t add up… and I’m pretty sure I was paying attention to the movie.

How did the true alien manifest at the end (hence giving everyone the <em>Alien</em> prequel they wanted)? The alien baby (which was not successfully aborted) killed big alien guy and then popped out of big alien guy’s stomach so it could grow up and meet Ripley later. All that seems random though. It couldn’t have been David’s motivation to get that to happen, could it? How could he have foreseen all that would happen? Is that where it all went wrong, that the doctor girl didn’t carry the baby to term? What about the other face suckers on the planet, what would they have  become if they’d popped out of people’s stomachs?

It’s all very confusing. It leaves me disappointed since I was hoping for some smart sci-fi from a director who has made lots of smart sci-fi.

I’m sure they’re gunning for a sequel since David and doctor girl got off the planet and went off “searching.” I know I won’t pay movie theater prices for that if it comes to the multiplex. I don’t need to pay $17 per ticket to be left wondering about the story.