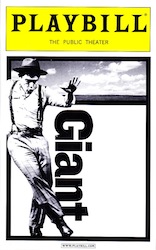 I wasn’t going to miss the musical version of Giant. I’d heard about it the show last winter during its run at the Dallas Theater Center. The immediate attraction was that Michael John LaChiusa wrote the music and lyrics. I’ve been a LaChiusa fan for years now because of his work on The Wild Party, Marie Christine and See What I Wanna See. He’s turned out another sweeping, complex score with Giant.

The show, which is based on Edna Ferber’s novel, is epic in scope as it covers a few decades in the life of a Texas ranching family.  The story kicks off with Bick bringing his Virginia-born wife Leslie back to his cattle ranch, which causes conflict with Bick’s sister Luz as well as the attention of ranch worker Jett. From there conflict abounds as Jett wants the affection of Leslie and makes moves to turn the ranch from cattle to oil. Bick and Leslie have children, a daughter that loves the ranch and a son who is more into books that cows. There’s also a significant story line about bigotry as conflict grows between the whites and the Mexicans, which Bick’s son also ends up in the middle of as he falls for a Mexican girl. 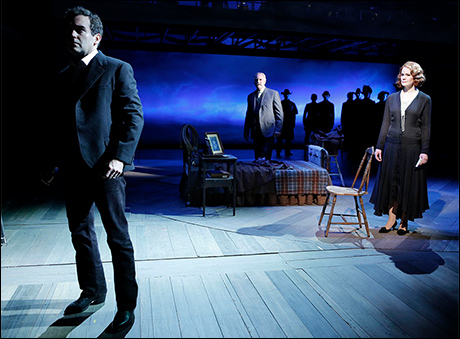 LaChiusa and book writer Sybille Perason have crafted a tight story with a ton of tension, passion and drama that puts this show on the same level as the epic Ragtime in the way that it captures many years in the lives of people trying to navigate fast changing times. Director Michael Grief (Rent, Angels in America, Next to Normal) helms it all to perfection.

An excellent cast is together for this production. Brian D’Arcy James is terrific as Bick, who has to navigate so many things changing around him. Kate Baldwin plays Leslie and does a fantastic job playing the strong woman who will not let herself simply stand quietly on the sidelines. PJ Griffith, who I’ve not seen on stage before, lent a great amount of swagger to Jett. John Dossett, on a break from Newsies, lent some nice weight to the role of Bick’s brother. Bobby Steggert, one of my favorite actors, was good (although underused) as Bick’s son. It’s always great to see Michele Pawk on stage and she was fierce as Bick’s sister Luz. The song she shares with Bick at the top of Act II was gorgeous and moving.

The find in this show was Katie Thompson as Vashti, the woman everyone thought Bick would marry.  This was also my first time to see her and her voice was amazing. Her “He Wanted a Girl” was lively and heartbreaking. Vashti was a true ranch woman, just like Bick’s sister… instead Bick chose a girl who knew nothing about the ranch and that broke Vashti’s heart while also making her stronger. “Midnight Blues,” which she later sings with Leslie, is also amazing. I hope to see Thompson in other shows because I’m now a fan. 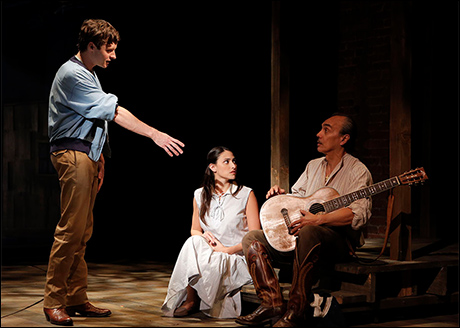 Giant is set to open this week, off-Broadway, at The Public Theater. We saw it last Sunday in the middle of its preview run and our particular performance came at the end of a week in which most of the show’s performances were cancelled since The Public had no power in the aftermath of Hurricane Sandy. The cast, which continued rehearsing uptown while waiting for power to be restored, seemed in great form. I expect they’ll have a stunning opening night for the critics. I’d also love to see this transfer to Broadway for an extended run as this is epic and spectacular. 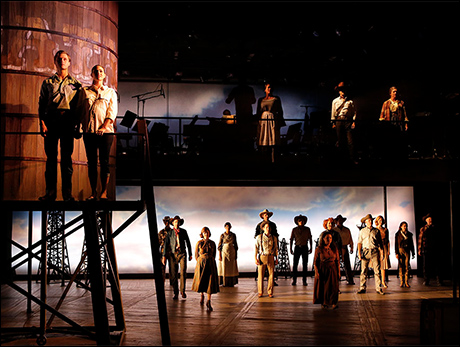