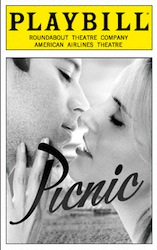 Picnic, the 1953 Pulitzer Prizer winner for drama by William Inge, is back on Broadway in a wonderful revival from the Roundabout Theatre Company.

The play, also set in the early 50s, takes plays in rural Kansas in the backyard of Mrs. Owens and Mrs. Potts on the day of and the morning after the Labor Day picnic. The quiet, run of the mill lives are turned on their head with a mysterious and sexy stranger shows up. Hal knows Alan from college, where Alan was often bailing him out of trouble. Mrs. Owens knows the trouble he might bring to her eldest daughter, Madge. Alan, who loves Madge, doesn’t see the trouble coming. For an older couple, it’s time to move their relationship to another level or end it.

By design, Sam Gold, the director, structured this to be darker and less romanticized than previous productions or the film. That plays very well here as you can feel the characters longing to bust out of the mundaneness off their every day lives.

The cast has solid foundations with Mare Winningham making her Broadway debut as Mrs. Owens. She wears her weariness well and you feel for her as her daughter travels down a potentially dangerous path. Ellen Burstyn, back on Broadway for the first time in10 years, plays Mrs. Potts who is just looking for some excitement from just taking care of her elderly mother. It was great seeing Burstyn on stage.

The men in the production are great. Ben Rappaport as Alan infuses the rich boy character with a genuineness as truly loves Madge and also wants to help Hal get on his feet. Sebastian Stan is sexy and confident and that makes him dangerous to all the women in the show since they don’t get that from their small town men.

Elizabeth Marvel and Reed Birney were wonderful as Rosemary and Howard who are the couple running off to get married at the end of the show. Marvel was outstanding as she bounced between happy, sad, drunk, hurt… She was all over the emotional scale and played it so well. Birney was also great as he went back and forth between the terror of both taking the marriage plunge and inviting someone else into his life.

Picnic was a delightful afternoon and I think the production and it’ll see some award nominations in the spring, especially for Marvel.

Here’s a sample of Picnic.