Dreamspinner Press’ new category romance line Dreamspun Desires debuted at the beginning of the month and I’ve devoured both of January’s books in short order. They were delightfully fun and romantic and I’m already eagerly awaiting February’s two installments (Will and I got on the subscription plan where two paperbacks arrive at the start of the month). 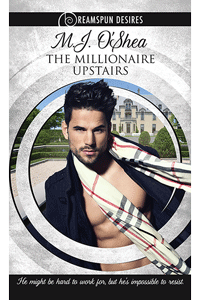 The Millionaire Upstairs by M.J. O’Shea felt like a comfortable Hallmark Channel movie, and I loved it for that. I’ve become a big fan of Hallmark Channel’s brand of romance and this book about Sasha, an assistant looking to rise through the ranks at fashion design house Harrison Kinglsley, and Kingsley himself, a successful man who rides behind a gruff exterior, fit the bill perfectly. Sasha isn’t a fan of Harrison because of his irritable and often rude behavior. So it seems like a nightmare to him when he’s assigned to the Hamptons for the summer to work for him while his boss, Harrison’s sister, is on maternity leave. Harrison isn’t too happy here because he’s had a crush on Sasha since they first met a couple years ago. Harrison doesn’t know what to do with Sasha as his right hand for three months.

Watching Sasha and Harrison dance around each other, while slowly acknowledging their attraction was wonderful. O’Shea applies just the right amount of push and pull and I really wanted the book to go on a few more chapter so I could see more of them. I can’t imagine a more appropriate book to start off the line than this one. 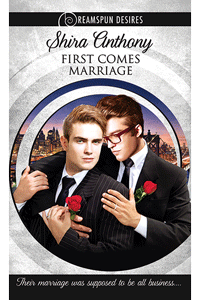 First Comes Marriage by Shira Anthony also tells the story of a successful business man, Jesse Donovan, who must marry or face losing the family business because of the conditions of his grandfather’s will. He approaches novelist Chris Valentine, who Jessie’s already attracted to despite the fact the tabloids depict him as a straight man in love, to enter into a business agreement to be married to him for a year. Chris, of course, is leery of the arrangement but also sees it as a year that he can focus on writing and try to find an agent and publisher.

Anthony builds the attraction slowly, especially for Chris who reminds himself that this is only business and, as far as he’s ever seen, Jesse is straight. The lengths Jesse goes to win Chris though are pretty awesome although both characters are a little boneheaded at times. Jesse’s step-grandmother is an excellent character as well, pushing both men to make choices in just the right way. The book’s ending hit a perfect note, bringing on a wonderful happy cry.