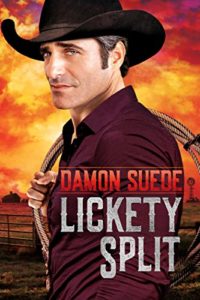 Full disclosure–I’ve never read a Damon Suede book. I’m not sure why. We’ve got his books. I just  haven’t picked one up. When Lickety Split was announced I knew it was time to finally read him.

It’s a hot, lusty, often cantankerous book that I loved. I admit I want to slap the main characters for being so difficult, but that was all part of the fun.

As the book opens, Patch Hastle is on his way home to Hixville, Texas, to bury his parents. Patch hasn’t been home in years–he took off at sixteen because he didn’t feel wanted or understood. Patch discovers his dad’s best friend (and Patch’s nemesis), Tucker Biggs, has been made executor of his parents’ will and that the family farm is in a living estate for Tucker. It’s a big mess for the man who just wants to get home, bury his parents, collect his inheritance and return to NYC to open a nightclub and continue his career as model and DJ.

Tucker’s changed in the six years Patch has been gone. He’s willing to give Patch the land so he can get back to NYC and his plans. Patch can’t believe this is possible. As he goes through his parents’ things, and spend time around Tucker, he slowly discovers that Tucker may not be the man Patch thought he was. Patch’s confusion runs deep. He’s had a crush on Tucker most of his life even while he hated the man for making his life hell at times.

Suede does an amazing job creating friction between Patch and Tucker (and he should since he teaches writers how to create characters like these). The hate/love cycles between them are peppered with bouts of explosive hate, intense sexual release, truly tender moments and times of confusion. It’s all mixed into a package that’s hard to put down even when you’re totally frustrated with the characters for not realizing how much they belong together.

I’ve never read a book that uses sex like Suede does here. Sex is usually fairly quick and lets the characters get to know each other a bit better but often don’t really move the plot. In Lickety Split, though, the sex scenes are epic in nature and provide a lot of insight into Patch and Tucker. They learn a lot about each other through the sex and the reader learns even more. It’s sex that goes far beyond just being hot.

This was a hot page turner and I’ll definitely pluck Suede’s other books off our shelf in the near future.