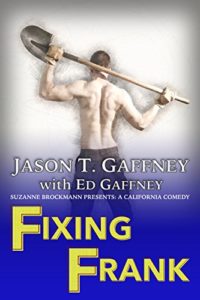 I love category romances and I tend to love romantic comedies and Fixing Frank by Jason T. Gaffney and Ed Gaffney, and presented by New York Times bestselling Romance author Suzanne Brockmann (Ed is her husband and Jason her son), is an absolute delight.

Fixing Frank opens on the day production starts on the web reality show Fixing Our Future, which offers the chance for regular people to earn big money for their charity passion projects. First grade teacher Terry is excited to be on the show to promote a literacy charity. Meanwhile, landscaper Frank is playing for an organization that provides clean water for developing nations. Neither knows the other is among the cast–and seeing each other on set for the first time is where the sparks fly.

All kinds of hilarity ensues as Terry and Frank end up being a team on the show and have to do all kinds of crazy challenges–like nearly naked car washing and painting each other. They also end up at a reception for their exes, who are actually sponsors of the reality show. Of course, like as in any good rom-com, Terry and Frank really do end up falling for each other but there are more than a few obstacles they have to overcome, including each other.

I loved this third installment of the California Comedy series and will be going back to the first two soon. Jason and Ed, who are also screenwriters, hit all the right romantic and funny moments. There’s also a healthy dose of angst as I really wondered if Terry and Frank would make it work even though I know very well a romance has to have an HEA. But the Gaffneys did a great job of keeping the tension in play.

NOTE: I received a free ebook for an honest review for Jeff & Will’s Big Gay Fiction Podcast. Make sure to check our the interview with Jason, Ed and Suzanne on the podcast.