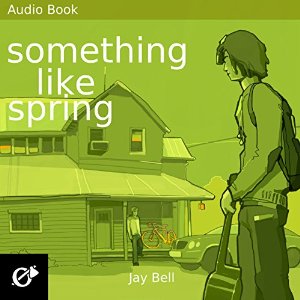 Anyone that’s paying attention to what I’ve been reading this year won’t be surprised that I’m totally sold on Jay Bell’s Something Like… series. Something Like Spring, despite being different than the first three books because it’s point of view isn’t from a character we already know, was wonderful.

Spring introduces us to Jason, a sixteen year old orphan as he goes to live with yet another foster family. He’s been through many families because he usually finds a reason to force the family to send him back to the group home. There’s a lot to like living with the Hubbards. Not to mention their very hot, biological son, Caesar. The relationship the boys form is adorable as they figure each other out.

The first glimpse of characters we know comes from Jason’s case worker. She’s Jace’s sister, who we met in Something Like Fall. And–spoilers follow from here–as Jason edges into adulthood and runs into some financial issues, he makes a call to Austin and ends up moving in with Ben and Tim.

The book keeps its primary focus on Jason as he figures out his life–what he wants to do and who he wants to spend it with. It’s also a wonderful look at Ben and Tim at a point in their lives that comes after the events in Something Like Winter. Jay Bell, as always, does a tremendous job with Jason’s story where as he balances so many threads–being an orphan, the guys who come in and out of his life, his struggle to figure out what to do when he grows up and lots more. On the other side, I loved getting the continuing story of Ben and Tim and how it fits with Jason.

Like the rest of the books in the series, I did this on audio and Kevin Free, once again, delivers a perfect performance.

If you haven’t taken the leap on these books yet–you should! I’ll be moving on to the fifth book soon because I can’t get enough.

I had the pleasure of interviewing Jay Bell for an episode of Jeff & Will’s Big Gay Fiction Podcast and we talked about all things Something Like… Give that a listen on the BGFP website.