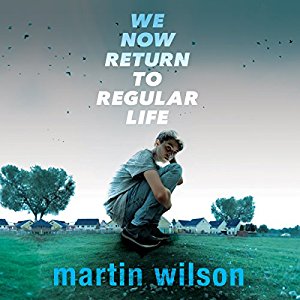 Martin Wilson’s debut novel, 2008’s What They Always Tell Us, is a stunning book that has been an inspiration to me since I first read it. Nine years later comes Martin’s second book and it was well worth the wait. We Now Return to Regular Life is a powerful book about what it means to be family, an ally and a friend. The book opens three years ago, as 11-year-old friends Sam and Josh are headed out, in the midst of a hot Alabama summer day to ride their bikes to the mall to get a videogame. It’s the last time they see each other because by the end of that day, Sam doesn’t come home and Josh and Sam’s sister Beth are both hiding things they know. Jump forward to the present and Beth gets a call to come home right away because Sam’s been found…and he’s alive. There’s a flurry of interviews, visits from neighbors, and strained relationships that form around Beth, now 17, and Josh, now 14, as they figure out how to cope with this major change in their world. The POV in the book alternates between Beth and Josh, which was a great way to tell the story rather than having Sam tell the story. For Beth there’s a shift in her friends as she initially gravitates back to the ones that she hung out with when Sam disappeared instead of her more recent ones, including potential boyfriend Donal. Josh, meanwhile, has a disconnect with his best friend Nick while finding himself drawn to Sam, even though they weren’t the best of friends before the kidnapping. As Beth copes with not being sure of her place at school or at home, Josh becomes the one Sam talks to about what happened during his three years away. There are uncomfortable discussions that lead to a tense finale. Wilson does a tremendous job balancing the stories of Beth and Josh as they figure out how to deal with Sam’s return and what it means to them while at the same time giving voice to Sam’s story from those three years plus what he has to do to feel right at home. The emotions that run through this book are strong and I loved how Wilson balanced the whole package to create a compelling, satisfying story. In particular the final act as Sam seeks to make peace with his three years away was both heart wrenching and cathartic. I both loved and hated where the book ended. I loved it because the story really was done (as both an author and a reader I know that) but I still wanted to know more about the journey these characters were on. I should note as well that I enjoyed the setting for the story too. Tuscaloosa, Alabama and Central High didn’t play as large a role in this book as they did in Wilson’s debut. However, both the city and the school were the setting for this book as well. In particular, the boys journey at the start of the book mirrored one I’d done a few times–although I lived a mile closer to the mall that they did but I recognized their route immediately. Several other locations also reminded me of my high school and college time in the area. Kudos also to narrators Will Ropp and Whitney Dykhouse who beautifully perform the alternating chapters. They both do a tremendous job of capturing the joy, sadness, tension and catharsis for Josh and Beth. I hope Wilson doesn’t wait another nine years before his next book because I want to see what story he chooses to tell next.