Happy Thanksgiving wishes to everyone!

Jeff updates his NaNoWriMo progress plus has news about Love’s Opening Night and Rivals. 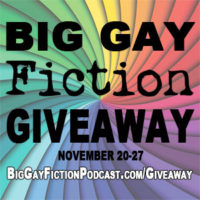 The Big Gay Fiction Giveaway, featuring free ebooks from more than 80 authors, which runs through Sunday, November 27, is announced.

Will reveals the top five gay romance titles on Amazon for the week and then reviews books by Clare London and Kate McMurray while Jeff reviews a title from Michael Jensen. Lisa from The Novel Approach also offers up book reviews—one holiday book plus three from debut authors.

The Gilmore Girls revival on Netflix is on the guys must-watch list for the coming weekend. Jeff and Will reveal their top five GG episodes along with honorable mentions.

Broadway musicals appearing on the Thanksgiving Day Parade telecasts on NBC and CBS are called out. In addition the guys discuss the recent coming out of Alex Danvers on the CW’s Supergirl along with the four-episode crossover that’s coming for the CW superhero shows on November 28. They also express their support for Billy Gillman on NBC’s The Voice.

[h2]Show Notes[/h2]
Here are the things we talk about in this episode:

Tis the season and we here at the Big Gay Fiction Podcast are in a giving mood. We’re giving you, our valued listeners, a chance to win a prize package filled with great reads, perfect for cozy winter nights in front of the fire.

The grand prize package includes: An autographed paperback of Soul Struck by Jacob Z. Flores, an autographed copy of The Grim Life by K.D. Worth plus paperbacks of Jake C. Wallace’s Soul Seekers and Dare to Love Forever. In addition, the grand prize winner and four runners-up will receive an Audible download code for TJ Klune’s Wolfsong, narrated by Kirt Graves.

Check Out These Other Episodes:

Special offer for Big Gay Fiction Podcast listeners: Get a Libro.fm 2-month audiobook membership for the price of one month. Click here to sign up today. Best of all, your audiobook purchases support local bookstores.

O: The Oprah Magazine named Big Gay Fiction Podcast in its list of "26 of the Best Book Podcasts to Listen to When You're Not Reading."

Book Riot listed Big Gay Fiction Podcast in its "33 of the Best Book Podcasts for All Genres."

Big Gay Fiction Podcast is part of the Frolic Podcast Network. You can find more outstanding podcasts to subscribe to at Frolic.media/podcasts!