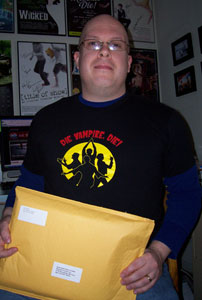 At 10:41am ET the envelope containing the Neutral Zone manuscript, cover letter, plot summary and self-addressed stamped envelope for the return notification went into the postal system. Next stop: Random House for the Twenty-Sixth Annual Delacorte Press Contents for a First Young Adult Novel.

Yes, I made the entry deadline! (Yes, on the left is my totally [tos]-geeky photo ripoff with the envelope just before I took it to the post office.)

It has been a crazed month working on the manuscript to get it ready. Right after I wrote the post about wanting to submit, I formatted the manuscript properly for submission and was devastated to discover I was about 120 pages over the maximum page count. After a day recovering from that, I dug in and started editing. Whole characters and subplots were vaporized, scenes vanished, and a couple rounds of tightening occurred. The manuscript that went into the mail today is 223 pages (one page under the max) and approximately 56,000 words.

It’s amazing the mind games you play on yourself while editing, especially day after day. Some days I could zip along with no problem. Other days the voices in my head would nag, nag, nag about the choices I was making. This morning was the worst. I skimmed through the story one more time and found it quite emotional… a mix of “wow, i really finished this!” and “you’re not really about to send that to Random House, are you?”

The good news is that the people who read the story said they liked it and gave good feedback about things to fix and tidy up. So there are at least three other people out there now who think this book is okay. I think it’s a good story too. As much as some of the editing was painful (I hate that I cut two Christmas scenes), the novel is much better for it. It’s also not lost on me that the 56,000 words is so very close to the 53,000 words this story was at the end of NaNoWriMo 2006. What I submitted today is tremendously better than that, although there are several scenes from that first draft that made the final cut. (I actually looked back at that draft briefly this morning and was stunned at how bad that draft really was.)

Icing on the cake this morning: As I left the post office, snow flurries were falling!

By the end of April, the judges will issue their decision. So now it’s about waiting and watching the mailbox for that SASE to come back.