Over the past week I’ve looked back over 2010 and it’s been an amazing year. I’ve done some things I never imagined myself doing, got involved in some new causes and had a lot of fun. Here’s a look at 10 things (and three honorable mentions) that made 2010 great and memorable for me:

1) Will: Yes, he’s always number one on the list, but he consistently earns it. This year, as I took on the long distance biking, he supported me through a lot of training and a bike accident that landed me in the emergency room. Plus there was the usual hockey, writing and work that keeps me busy as ever. He cooked some amazing food, and especially awesome was his discovery of the Pioneer Woman website. He found the sound wisdom of Chris Guillebeau (more on that in #5) and that got us thinking about things in a different way. After 15 years together (celebrated this past May), he continues to prove why he’s the best husband over and over again.

2) Braking the Cycle: In January the idea of riding a bicycle from Boston to New York wasn’t even floating around in my head, yet by spring time I was training so I’d be able to handle riding nearly 300 miles in three days. I did the ride, raised just under $4,000 for the HIV/AIDS services at The Center, met some truly amazing people in the riders and crew and ended up with some awesome new friends in the Flying Goats. I’m going to tackle Braking the Cycle again in 2011 with the goal of more money raised and completing the entire course. (Read about the ride: Day 1 | Day 2 | Day 3) 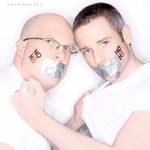 3) NoH8 photo: In February, Will and I went to the open photo call for the NoH8 Campaign. We ended up with what is likely the best picture we’ve ever had (or will have) taken of us and got to add our faces to the thousands of others who stand for LGBT equality. The shoot was exciting with hundreds of others all there with the same convictions. The minute or two being directed by Adam Bouska was kind of surreal–probably the only moment I’ll pretend to be a super model. (Read about the shoot.)

4) It Gets Better Project: The summer and fall brought devastating news of several gay teens committing suicide because they couldn’t take the bullying any more. Radio show host and columnist Dan Savage created the It Gets Better Project so adult voices could be heard letting teens know that things do get better and that there are people out there who care about them. Amid all the messages of hate and intolerance there are so loud today, these voices of reason, hope and compassion are desperately needed. After Savage and his husband Terry created the first video, thousands more were recorded by every day folks and companies large and small supported their employees efforts to make videos. Celebrities and even President Obama and Secretary of State Clinton lent their voices to the important cause as well. I was honored to stand with some Braking the Cycle riders and crew to shoot a video, which is making its blog debut below.

5) Chris Guillebeau: Discovering Guillebeau, his website and his Art of Non-Conformity book this fall provided much food for thought during the last few months of the year. Questions like “why are you doing this?” and “what can you do to change the world?” have rolled through my brain and prompted some changes here and there to make sure I’m getting the most out of my time. I’ll be working towards more non-conformity in 2011, especially looking to see what I can do to help change the world. (Read my manifesto.)

6) DADT repealed: History was made on December 22 as President Obama signed the bill to overturn the discriminatory “Don’t Ask, Don’t Tell” policy for the military. This was a major step forward for LGBT rights. It also put a bright spotlight on how hateful some of our lawmakers are as they tried to stop the bill’s passage by attempting to demonize LGBT citizens and make us seem like a force that could destroy the armed forces ability to fight a war. The bill was disgraceful as are the people who voted against its repeal. I’m very happy for my friends in the military who can now serve openly and honestly.

7) Writing Life: I didn’t get as much done in my writing as I wanted to this year. There were time management issues, especially balancing the bike training (and I’ll do a better job of that in ’11). But I did get one story published, The Dancer & Sexy Big Man, which garnered my first ever reviews… and thankfully the reviews were mostly good and offered some constructive advice for future works. I have another story that will get sent out by the end of the year (and hopefully get published in the first quarter). I also worked some, though not enough, on my YA novel, which is going to be the focus of my writing time in ’11.

8) Provincetown: We got away for vacation this year and headed off to one of our favorite places. As I’ve said before, P-town is a magical place and going there for a week to relax and mostly unplug from the rest of the world was just what we needed. It was a week of chilling out, a couple of plays, a few drag queens and even a couple movies (we finally got to see Bear City!). It was a perfect week. (See our pictures from the trip.)

9) SYTCYD Season 7 & tour: It is well documented that I love So You Think You Can Dance. This was a banner year for the show as they introduced America to the amazing talent of Alex Wong, showed off some powerful choreography from Travis Wall and brought back some of the best dancers from seasons past to work with the new contestants. As if the televised season wasn’t enough, the SYTYCD tour came to Radio City Music Hall so Will and I got to see the whole thing live. Here is a look at some of Season 7’s best (I can’t fit all my favorites into one upload)–Alex & All-Star Twitch, Alex & All-Star Allison, Lauren (the season’s winner) & All-Star Mark, Robert & All-Star Allison (featuring Travis’ choreography) and Billy & All-Star Ade.

10) Angels in America: The Signature Theatre Company’s production of Tony Kushner’s Angels in America is a case study in the power of live theatre. Kushner’s epic play chronicling the early year’s of AIDS found new power and intensity in Michael Greif’s production, the first time it’s played in New York since it’s early 90s Broadway run. The intimate staging, amazing cast and relevant themes puts this on the list of all-time favorite theatrical experiences. We’re headed back to see Part 2 again in 2011 to see what new cast members–including Ugly Betty’s Michael Urie–bring to the stage. (Review of Part 1 | Part 2)