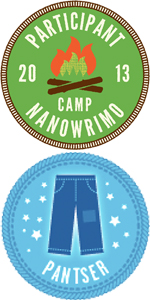 I never went to camp as a kid. Being outdoors wasn’t my thing.

I am, however, going to camp for July and I’m doing it without leaving the apartment, New York, or my routine.

I’m doing Camp NaNoWriMo for the month so I can get the first draft of a Hat Trick‘s sequel completed. While Hat Trick doesn’t come out until September, I’ve had ideas for a sequel knocking around my head recently and I’m going to use Camp to see what I can make of the ideas.

As a Camp badge, I picked Pantser since that’s the primary way I do my initial draft. I’ve usually start with some basic concepts, but have never been much for outlining or planning. Actually, for this story, I’ve done more outlining of scenes than ever before, mostly I think because they all flooded my brian at one time.

I’ve also got a small part of the story written already. A couple years ago, while I had Hat Trick put aside for a bit, I wrote a short story sequel. That story now fits nicely into my idea for a sequel.

My goal is to complete 50,000 words, and hopefully get the entire first draft done during the month. Despite my outlining, I don’t know where this story ends yet… that’s my true pantser self coming out. Hopefully the ending reveals itself over the course of the 31 days.