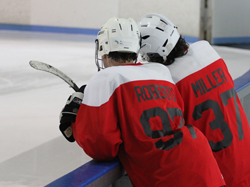 I’m happy to report that the story of Simon Roberts & Alex Miller continues in July. Earlier this week Hat Trick 2: Playing the Rebound was accepted by JMS Books and I signed the contract yesterday morning. The book should be out during the last week of July (stay tuned for the exact date).

I’m still working on the official blurb for the book, but here’s what I have currently, which will give an idea of what’s coming up in Playing the Rebound.

The events from two years ago are still fresh in Simon Roberts’ mind as he enters his sophomore year at the University of Michigan. Nightmares are a routine occurrence as he relives the crimes his father and brother committed against him and his friends. Now, with his father ill and asking to see him, he must decide if he should see the man who tried to send him away to be fixed. And then there’s Zack. Simon’s not sure he wants to make peace with his older brother who constantly tormented him as they grew up and caused a chain reaction of events by outing him to their parents.

Alex, while wanting Simon to find closure in an effort to stop the bad dreams, is furious at the thought of forgiving Zack because of the injuries he sustained at Zack’s hand, not to mention the death of a good friend. With no clear direction, Simon finds guidance from an unexpected, but very welcome, confidant.

Despite the past pulling on him, Simon is making great strides for his future as he starts working with teens at the local LGBT community center. He discovers the opportunity to use his story as a teaching tool so others might avoid what happened to him as he came out. Never appreciating the spotlight previously, Simon searches for the courage to speak his truth to an audience.

As all of this unfolds, the University’s student body is faced with an anti-gay attacker among them. Simon must decide how to respond to the danger. Can he step up and help apprehend the perpetrator? Or will he succumb to his fear of past demons?

Luckily, not everything is chaos. Simon and Alex mark their two anniversary in epic fashion, continue to play great hockey and hang out with good friends. But with the past and future demanding their attention, how will they ultimately react? Can they make plans for their future, or is the past too much of a distraction? Can they set up the rebound necessary to create the scoring opportunity for their future?

Here’s also a peek at the first chapter. This is still work-in-progress since I’m about to start the official editing process with JMS, but you can check it out for your first glimpse of what’s coming in about two months.

Also, for this weekend (Memorial Day weekend), Hat Trick is 35% off at JMS Books. If you have’t read book one yet, it’s the perfect time to pick it up for a low price.

Thanks to everyone who has supported Hat Trick and asked for a second book. I’m already working on book three, so there will be more to come!