The holiday season is pretty much over, but I wanted to take a moment to reflect on a couple of awesome gifts I received over the past week. It’s always a blast when you know people are wishing for your book, have your book and/or are enjoying your book.

That happened twice with Hat Trick in the week that followed Christmas. First this was this duo of tweets:

Which was followed by this a few days later…

Then, on the same day I hosted Wade Kelly here for her Misplaced Affection release, she started talking about Hat Trick on Facebook and her blog. It was particularly an honor for me that she was reading Hat Trick because I know that 1) she doesn’t have much time to read and 2) she has a ton of books to choose from. 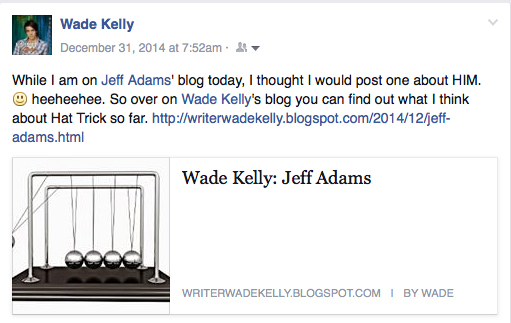 Meanwhile, Rivals got some of the  love too on Twitter.

As you know if you’ve read my 2015 plans, there’s a lot coming this year. Thanks to everyone who is asking for, purchasing and reading the books, and then reviewing them. It is very much appreciated.