Friday, December 1 had so much stuff happening!

Will and I revealed the cover for our first ever collaboration!

We’ve been working on The Hockey Player’s Heart for a few months now and for it to finally have its cover reveal was awesome. We love Bree Archer’s design is gorgeous and we love the guy she picked to represent hockey superstar Caleb Carter.

While I’ve just shown you the cover here, if you go check out the reveal post on Love Bytes Reviews (thanks for hosting us, Dani!) you’ll also get an exclusive excerpt as well as the chance to win a free ebook copy and a $5 Amazon Gift Card. Get over there before the end of the day on Thursday, December 7 when the Rafflecopter will end.

We’ll have lots more to tell you about The Hockey Player’s Heart in the New Year as it heads towards a January 16 release. 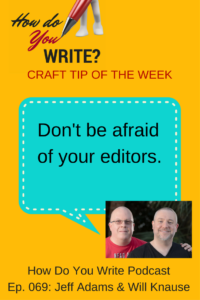 Friday also saw the release of a podcast episode that Will and I were guests on. We’re big fans of Rachael Herron’s podcasts. The Petal to the Metal, which she co-hosts with J. Thorn, is a show we usually listen to each Wednesday, which is the day it releases. In fact, we usually listen during lunch so it’s kind of like we get to have a meal with Rachael and J every Wednesday.

Rachael also hosts How Do You Write? where she interviews authors about their process. It was such a thrill to be invited to her show. Honestly, it also triggered an imposter syndrome moment for me because how am I to be talking process with anyone. Despite publishing since 2009, and learning so much along the way, I still feel like there’s so much to know. That aside, it was great talking with her, and to share the journey that Will and I are on together as authors, podcasters and entrepreneurs trying to make our way with a business focused around creating.

Thanks for having us Rachel! You can check out our episode of the show here.

The other big deal from Friday is that I submitted the third book in the Codename: Winger series to Harmony Ink Press for their review. If they accept, it’s slated to publish in the fall of 2018. (Schooled, the second book of the Winger series is already set to release in Spring 2018.)

Here’s to having more Fridays like this one because it was pretty darn cool!