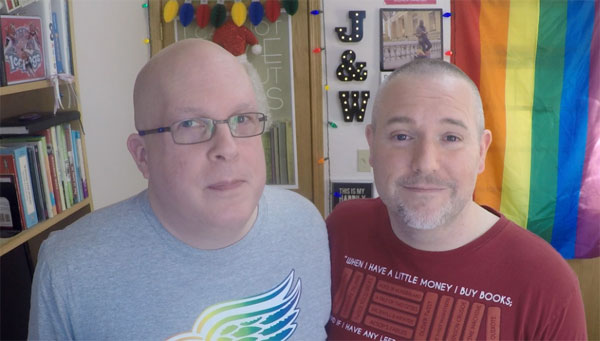 I’m often amazed at who we get as guests for Big Gay Fiction Podcast. I’m pretty fearless about asking people Will and I decide we want to have on the show. I think that comes from years of journalism where I had to ask people for interviews a few times a week. And, frankly, I’m of the opinion that it never hurts to ask because the worst you’ll hear is “no.”

Over the summer, Kit Williamson and John Halbach did a Kickstarter for season three of Eastsiders. We love that show and had talked about it a couple of times on the show. With the Kickstarter happening I reached out to them as asked if they’d be on the show–John responded later that same day that they’d love to. Kit & John are delightful people. That interview was great. In July we met them in LA at OutFest where four of the season three episodes was screened. And when season three officially released last week, we asked them back to tell us and the listeners all about it. Again, the answer was “yes,” even in the midst of their release week responsibilities. Season three is awesome–to me the best of the series so far. Cal and Thom take a cross country road trip that is equal parts funny and poignant (plus there are excellent shenanigans in Palm Springs and back in Silverlake too). If you haven’t seen the show before, go get it! Seasons 1 and 2 stream on Netflix and season three is just out on DVD and digital. And, stop by episode 113 of BGFP this week to hear from Kit & John. Thanks to Kit & John for such wonderful TV and for being such great guys in general. I look forward to seeing what’s up next for them.

Meanwhile, this week we’ve also got a review of the latest holiday novella from Matt Burlingame, a look at the CW superhero cross over Crisis on Earth X, Barbra Streisand’s Netflix concert and season six of Where the Bears Are.

Oh, and it’s the final week to enter the Happy Holiday Paperback Giveaway!