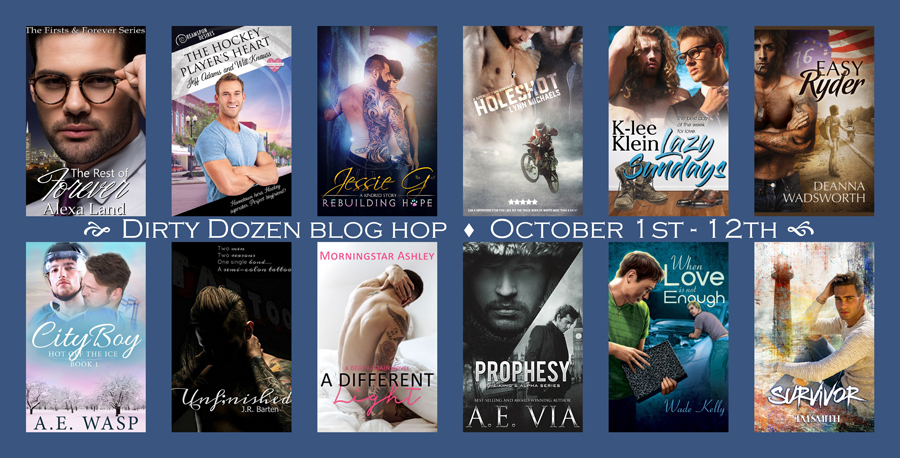 I’ve very pleased to welcome Jessie Gin as part of the 2018 GRL Dirty Dozen Blog Hop. Let’s find out her answer to the twelve questions. Don’t forget to also get your entries in the Rafflecopter below to win an ebook from each of the authors participating.

Take it away, Jessie!

Amy Wasp: What is your favorite trope to write and why?
I’m a sucker for hurt/comfort, opposites attract, and love doesn’t conquer all (but it helps). Why? We all know real life doesn’t always come with a happy ending, so writing stories that do are my escape. It’s what I want to read, so I’m just contributing to the supply 🙂

Jeff Adams: What’s your favorite part of the writing process and why?
Meeting the characters, learning their stories, and watching them grow. I don’t write with an outline, so everything about them is a surprise when it appears on the page and they haven’t disappointed me yet.

TM Smith: What inspires you to write?
Life. The news. Someone I see on the street. A song. Inspiration is everywhere.

AE Via: What career would you have if you never would’ve published your first book?
Though part-time, I’m still a bookkeeper and a web designer, both careers I continued despite publishing. Someday, I’d love to just write, but I’m not there yet.

Lynn Michaels: How do you balance being original and giving the readers what they expect/want?
I’ve found that if I try to write what’s expected of me, I hit a wall immediately. So I just don’t. I know there are books my readers are waiting for, they tell me constantly, but I’m content with the stories coming in their own time. Between now and then, I’ll put out what speaks to me, how it speaks to me. That’s the only way to know I’m getting it right.

JR Barten: What have you done as a writer that you are most proud of?
Using my new releases to raise money for charities like the Zebra Coalition, the Gary Sinise Foundation, and the Trevor Project.

Morningstar Ashley: What genre and trope would you like you write that you haven’t yet?
The one that I was interested and unsure of was Paranormal, specifically shifter. I love to read it, but could I do it justice? Nine months ago, I decided to find out and that’s the book I just released. Other than that, I keep threatening to write a funny book, but it never quite works that way.

Alexa Land: What are you working on now, and when can your readers expect it?
I have four books in progress: Taking the Top (Devils Pride MC 4), The Moments that Define Us (my first MF/Spinoff of Sizzling Miami), the next Forgotten Soldier book (untitled) and the sequel to Brewing Up Trouble (also untitled). Hopefully, Taking the Top will be out before the end of the year.

Deanna Wadsworth: How do you come up with your character’s names?
Titles and names usually come to me with the idea. then the blurb. Those are my starting points before I begin writing. I have more trouble with secondary characters and usually go back to my reader group for ideas.

K-Lee Klein: Do you usually have only one project on the go or do you multitask between stories?
Always juggling. If one story stalls, I can jump to another and feel like I’m always working to the two magic words: The end.

Jessie Gin: What do you think makes a good story?
All I want are MCs to root for, to become invested in, and connect with. Give me that and I will never notice a typo or a plot hole.

Wade Kelly: What is your suggestion or piece of advice to new and upcoming authors?
Develop a thick skin. I don’t have it, but I hear it helps a lot. 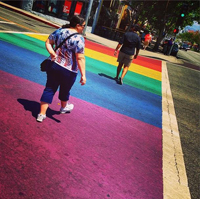 Like many readers, I’ve dreamed of being a writer most of my life. Thanks to social media, I was able to follow my favorite authors and hoped to glean some words of wisdom as I pounded out half-formed ideas with alarming regularity. It isn’t always easy, but it’s definitely been worth it and with four series in the works and a full schedule of releases planned for the next two years, it’s been amazing to have made this dream my reality.

I am a firm believer in marriage equality, love at first sight, power dynamics, and happily ever after. I’m a lover of strong secondary characters and series filled with families—biological or chosen. All are themes you’ll find throughout my books. 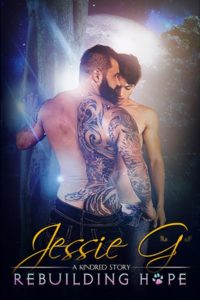 Holden Bancroft was born with a better than average brain and not much else. Often described as strange and sickly, his attempts to conform only made him look foolish and a life-long diet of pills hasn’t provided a cure. Deciding to strengthen the only tool in his arsenal was liberating and learning became his greatest joy. But each episode is another reminder that his time is limited, and Holden intends to use everything he’s learned to help the small town of Hope before he dies.

Alpha Crowley Lomond, Zenith of the Americas, isn’t exactly happy with his ascension. Leading isn’t the problem, it’s acting like he’s somehow better than every other shifter that chafes. But while living and working beside them may seem noble, Crowley is more than just an alpha. As Zenith, he’s their example, their teacher and guide, and the one they will turn to when their way of life is threatened.

Meeting changes them in ways they never could have predicted and unveils a web of deceit that began long before they were born. Together, they will have to unravel the lies and reconcile the consequences if they are to protect the shifter way of life. Along the way, Crowley will become the Zenith his Kindred was born to love and their enemies will learn that there&#39;s nothing more dangerous than fated mates.