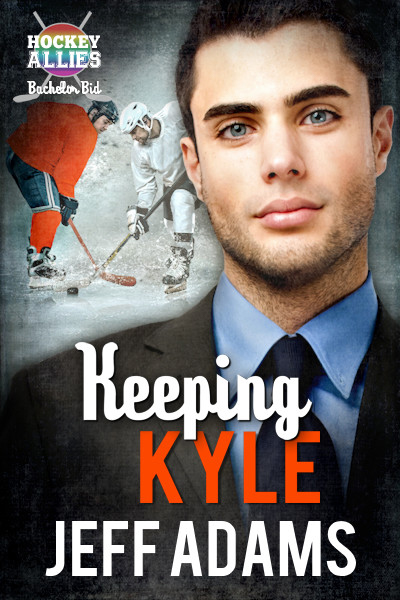 An NHL All-Star
A workaholic entrepreneur
One irresistibly tempting opportunity

KYLE
I can’t believe I let my best friend talk me into being auctioned off for charity. But when I get a look at the guy who placed the winning bid, I feel like I’m the one who snagged the top prize.

AUSTIN
I didn’t get to where I am by letting opportunities slip through my fingers. When I learn that Kyle Pressgrove will be part of the bachelor auction taking place during All-Star weekend, that’s the kind of chance that you grab ahold of, and I have no intention of letting go.

With my career on the line and the possibility of Kyle being traded to a team half-way across the country, things between us might be over before they’ve even begun. I’d give anything to keep Kyle in my life, but everything might not be enough.

BUY YOUR EBOOK NOW FROM YOUR FAVORITE RETAILER
PAPERBACK: Amazon / Barnes & Noble or your favorite bookstore 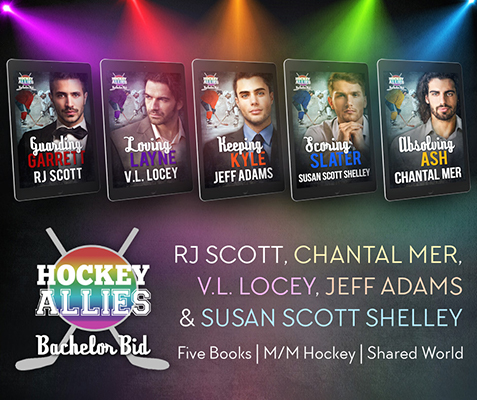 Hot hockey players on the auction block…
Win a date with a professional hockey player during All Star weekend in Chicago. From leading scorers to fan favorites to guys you love to hate, watch the players strut their stuff in support of the Hockey Allies charity. Place a bid. You just might find someone to keep you warm.
One night. One bid. One hockey bachelor auction… could change everything.

An excerpt from Chapter 1 of Keeping Kyle

“You ready for the auction?” In the locker room, my younger brother Bobby started stripping out of his gear as I did the same. The other guys from our pickup game changed around us. “Got a fancy suit so you look extra hot for the bidders?”

“Did you just say hot?” I shot a scowl at Bobby.

“What? I want my brother to get high bids. Family honor on the line and all.”

This locker room always took me back about a dozen years to a time when being jammed in together with a bunch of friends to change was a common occurrence. Bobby played on a recreational team in Chicago, and when I was in town, he always organized a pickup game with some of his friends and teammates.

This weekend, I wasn’t here with the rest of the Detroit Arsenal though. The NHL All-Star Game would be played here, and not only had I—Arsenal center Kyle Pressgrove—been selected to play for the Western Conference, but I’d also be competing in the skills competition for the title of fastest skater.

An unofficial event for the weekend that I’d gotten involved in was the Hockey Allies hockey bachelor auction to raise money for its work to ensure equality in hockey regardless of a player’s orientation or gender identity. I’m always ready to help a good cause, but being paraded out for bids scared me a bit—actually more than a bit. I’m trying not to focus on that.

“Hey, Bobby, is it okay if I bid on him?” My face heated, and I suddenly felt self-conscious in just my jock shorts as one of Bobby’s friends added to my embarrassment.

“Of course, as long as you treat him to a great date if you win.”

“Please stop.” I buried my face in my hands, hoping to will the redness away before looking back to Bobby. It wasn’t easy though. Many of his friends chuckled. I couldn’t blame them for that since I would’ve laughed too in their shoes. “As my brother, you are not allowed to talk to me about being hot… or not being hot… or whatever. Jesus. I can’t believe I let you and Garrett”—or G, as Bobby and I called him—“talk me into this thing. And I’ve got to be up there against Mister ESPN. Really? I get that it’s a good cause, but what if I’m won by some creepy stalker type?” A valid concern since Garrett’s been dealing with that stuff. “And what if no one bids at all?”

“Have you seen you?”

Why? Why did he keep going?

“The hockey body. The five o’clock shadow. Those piercing eyes. I know what people say about you online. In fact, you could give people what they want and show more skin, maybe an open shirt. As for G, it’s ESPN’s loss they didn’t pick you.”

I snorted out a laugh. Garrett Howell, a center for the Burlington Dragons, had a perfect ESPN body, and he deserved that cover, even though I’d given him a fair amount of shit for it. My brother and I had been friends with him since we all played juniors. He even stayed with us and essentially become our third brother.

We’d also all come out to each other.

He’d been the third person I’d told, after Mom and Bobby. He told me shortly after he moved in with us because he’d wanted me to know, so I told him too. We’d been a great support system for each other over the years, and Mom and Bobby always had his back too. All his social media activity and the cover had brought some unwanted attention though. Even though he had someone watching out for him, I still worried.

“You got the family looks too, you know.” I looked to divert the discussion. “You conveniently forget that sometimes.”

“But they work better on your athletic build.”

For the rest of story, pick up your copy of Keeping Kyle today.