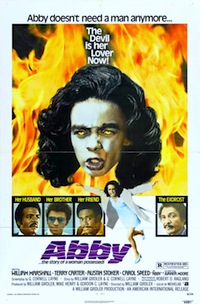 Abby doesn’t need a man anymore… The Devil is her lover now!

It doesn’t take a genius to figure out that Abby (1974), the story of a woman possessed by an evil African sex spirit, was “inspired” by the blockbuster success of The Exorcist (1973). Warner Brothers, the studio behind The Exorcist, sued the makers of Abby and had it pulled from theatres. The suit was eventually settled and Abby faded into cult movie obscurity… until now.

What it’s all about: One sunny afternoon, a group of college students bid farewell to their favorite teacher who is leaving on a research trip to Nigeria. If it weren’t for the establishing crane shot, you’d swear that this ragtag group had grabbed an old 8mm camera and shot the scenes that we’re now watching. Not only does Abby look like it was made on the cheap, but the acting is also decidedly amateur. One student stumbles through his line reading with several pauses punctuated with “Umm’s” and “Uhh’s”. But who can blame him? The dialog between the professor and his students is amusingly clunky. It’s only purpose is to provide backstory and set-up the action that is to follow.

“Eshu is the most powerful of all earthly deities,” Professor Williams (William Marshall) lectures. “Eshu is a trickster, creator of whirlwinds… chaos.” As a going away gift, his students give him an insanely large mirrored crucifix. Talk about bling!

After the opening credits, the action shifts to Africa, where Professor Williams and his assistants discover an interesting ancient artifact. They open the hand carved box and a fierce wind rips through the cave, releasing Eshu.

Back in the states, the professor’s son Emmett (Terry Carter) and his wife Abby (Carol Speed) move into their new home. Abby’s mother (Juanita Moore) helps the young couple set up house. Over a meal of fried chicken, reverend Emmett proudly announces that, in addition to his wife’s work with the church youth program and junior choir, Abby has earned her certification for marriage counseling. Momma couldn’t be happier. “Ain’t no sin in bein’ proud of doin’ a good job, livin’ a good life and lovin’ a good man.”

The evil spirit that the professor set free has somehow made it’s way into Abby’s happy home. How Eshu crossed the globe and chose to inhabit the professor’s daughter-in-law is never explained. When Abby takes a shower and reenacts the Herbal Essence shampoo commercial, it’s clear that she just ain’t feelin’ right. She is attacked by and unseen force in the basement and is overcome by suicidal tendencies while preparing chicken in the church kitchen.

Abby is understandably upset when she finds that she’s cut herself, but Carol Speed’s method acting gets a little too method in a scene with Moore. She blubbers so loudly that her lines are completely (and amusingly) unintelligible.

You have to give Speed credit though; she certainly doesn’t hold anything back. Standing before her husband’s congregation, Abby leads the choir in an excruciating hymnal. She sings, “My Love is a Witness” so poorly that you’d assume that it’s the work of the devil, but no, these are the vocal stylings of the “normal” Abby. Later, during her husbands sermon, she goes completely bonkers, attacking a congregant while laughing and foaming at the mouth.

That night, Emmett tries to get his wife in the mood by quoting some scripture, but Abby, or rather Eshu, ain’t playin’. With the gravelly voice of a soul possessed, Abby tells him, “I’m not your ‘ho. Shit, you ain’t got enough to satisfy me, you impotent son of a bitch!” She then kicks him in the crotch. Who knew that demonic possession would be as zany as an episode of America’s Funniest Home Videos?

When Abby counsels a young married couple, it goes as you might expect. “All men are not created equal. Better make sure what he’s got first,” she growls while ripping off her dress. “I’m gonna take ole’ long George upstairs and fuck the shit out of him!”

Emmett tries to calm her. “God, Abby, what ever possessed you to do a thing like that?”

She tosses him on the bed, straddles him and proceeds to bitch slap him, “You’re gonna love and obey me!”

An elderly neighbor woman (Nancy Lee Owens) pays a visit to a housebound Abby. With tongue wagging, she proceeds to terrorize the old lady, giving her a heart attack. As her geriatric corpse is taken away, a doctor offers his assessment of the situation, “It’s all very unusual.”

Emmett places a panicked overseas call to his father and begs him to return home. Abby is given a through medical exam, but nothing abnormal can be found. Angelic one moment, devilish the next, Abby tells her husband, “I wanna thank you for callin’ that mother fuckin’ father of yours. Give him my worst regards.”

Abby escapes the hospital and arrives home in time to welcome Father Williams. In all seriousness and with Shakespearian intensity, Marshall commands, “Hear me demon! Leave this woman’s body!”

“I’m not through with Abby yet,” Eshu laughs, unleashing his earthshaking demonic power.

Feeling the need to get her groove on, Abby/Eshu heads to a local bar filled with patrons dressed in a shocking array of 70’s pimp-a-licious fashion. Abby picks up a member of her husbands congregation. They go for a drive and park in a remote location. When he can’t satisfy her, Eshu kills him, or at least we assume so. The car starts to shake and fill with smoke. A demonic smoke bomb is certainly a cheaper special effect than say, a spinning head or pea green puke.

Returning to the bar, Abby next sets her sights on an annoying white guy who thinks his W.C. Fields impersonation will get her hot. Inexplicably, it does. They slink off to a private room upstairs. Eww. What kind of bar is this anyway? Thankfully, whitey is never heard from again.

Abby’s brother, Detective Cass (Austin Stoker) has joined Emmett in his search for his wayward wife. They eventually find her in the bar making time with two brothers. Once Abby/Eshu clears the room by tossing the men around, she gives a typically warm greeting to Professor Williams, “Hello motherfucker!”

With his XXXL piece of Christian bling for protection, Father Williams begins the exorcism. Who’d have ever guessed that the battle between good and evil would be so… well, chatty. Eshu and Williams try to out-talk one another before Emmett and Cass finally subdue her.

Light as a feather, stiff as a board. Abby does some fancy levitating before Williams finally gets down to business. As he recites his godly incantations, all hell breaks loose. The liquor bottles, the jukebox… heck, even the disco ball, explode as Eshu is driven from Abby’s body. Once she is finally free of demonic possession, Father Williams slings his jacket over his shoulder and saunters out of the bar. Ah, all in a day’s work.

The final scene shows Abby and Emmett as they leave on a well-deserved vacation. Abby waves good-bye to her mother, “Momma, I wuv you.”

Yes, she actually says wuv, proving that you may be able to purge a demon from your soul, but that doesn’t mean you won’t loose a few brain cells in the process.

In Conclusion: The Collector’s Edition DVD of Abby marks the first time this cult gem has been available to the public since it’s initial release. Though bad movie fans can rejoice in the fact that Abby can finally be seen, this is hardly a pristine or difinitve version of the film. The quality of the print used is pretty atrocious. With all the scratches, discoloration and audio distortion, it looks as if the reels were unspooled and dragged over 50 miles of bad road. A trailer and radio spot are included as extras, as well as a selection of production art and a text essay detailing the film’s troubled history. CineFear’s DVD release of Abby went out-of-print a short time after it came out. Copies of the film from other distributors can still be found at certain specialty retailers. Though the quality leaves something to be desired, fans of Blaxploitation and low-budget horror are sure to appreciate this camp classic from genre director William Girdler.