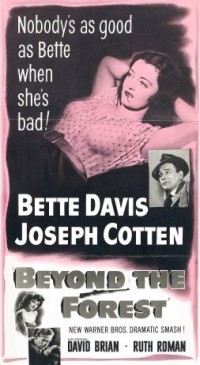 Nobody’s as good as Bette when she’s bad!

The above tagline is the actual promotional copy used to sell Beyond the Forest (1949), and when they say bad… they ain’t kidding. Bette Davis gives one of the most wonderfully terrible and outrageous performances of her career, making Beyond the Forest a must-see for any aficionado of cool cinema trash.

What it’s all about: The movie begins with this erudite prologue:

This is the story of evil. Evil is headstrong—is puffed up. For our souls sake it is salutary for us to view it in all its ugly nakedness once in a while. Thus we may know how those who deliver themselves over to it end up like the scorpion, in a mad frenzy, stinging themselves to eternal death.

Next, a narrator takes us on a walking tour of Loyalton, Wisconsin where the quaint streets are completely deserted. It seems that every man, woman and child in this sleepy mill town are at a coroner’s inquest. In the packed courtroom, Bette Davis leaps into camera frame, “Why should I kill him? It was an accident!” she shrieks as she fiddles with her black Morticia Addams wig. As if all this weren’t enough, the picture starts to disolve and the story heads into flashback.

So far we’ve had a cautionary prologue, expository voice-over narration and a flash back … all within the first five minutes!

After a day spent fishing with her physician husband, scheming Rosa Moline (Davis) sets an elaborate plan into action. First, she gets rid of her hubby (Joseph Cotton) with news that one of his patients has gone into labor. With a phony twisted ankle as her excuse not to go back to town, she stays behind and shoots defenseless woodland creatures. “They irritate me,” she tells Moose (Minor Watson) a grizzled old-timer and recovering alcoholic. Once he’s passed out from the drink Rosa has thoughtfully provided, she hightails it to nearby Latimer Lodge for a rendezvous with wealthy Chicago industrialist Neil Latimer (David Brian). While reclining on a bovine throw pillow in front of a romantic fire, Rosa demands to know why he hasn’t written her.

“Say it now,” she commands.

As the night wears on, Louis Moline delivers a baby boy. But the child’s mother is gravely ill and he must try and find the necessary medicine.

In the game room of the lodge, Neil and Rosa have a frank discussion about their relationship. “What do you want?”

“You,” she deadpans. “You could get me out. I’m the kind of woman you need. I want you to marry me.” When Neil heartily laughs at her assertiveness, she slaps the smile right off his face. Apparently, she is the kind of woman he needs and proves it with a hungry kiss.

When Louis finally returns to the modest home that he shares with his wife, Davis delivers one of the most famous lines of her career, “What a dump.” Davis barely mutters the throwaway line that would later gain notoriety after being featured in the play Who’s Afraid of Virginia Wolf?

The next day, Rosa sashays through town on her way to the post office. Her PO box only holds junk mail. There are no letters from her lover. A pair of housewives coolly assess Rosa as she dejectedly heads back home. “Even when we were in high school,” one of them whispers, “Rosa was always different from everybody else. It’s hard on Rosa being tied to a town like this.”

To which the other woman can only reply, “It’s hard on the town.”

Once Rosa returns to her “dump”, she takes out her frustrations on her half-breed maid. “Mrs. Moline, let’s not start calling each other names,” her sassy servant (Dona Drake) warns, “I’ve got some fancy one’s saved up just aching to be used.”

Rosa’s ennui is briefly interrupted by the arrival of Moose’s estranged daughter, Carol (Ruth Roman). When no one is looking, Rosa tries on Carol’s fur coat. The coat represents all the fine, luxurious things that Rosa has been denied. As she strokes the fur and puffs on a cigarette, Rosa hatches another scheme. With a little money, she could really live it up in Chicago.

When the townsfolk start to give Doc Moline the cold shoulder, it doesn’t take him long to figure out that Rosa has gone through his business ledgers, called all his patients and forced them to pay their past-due doctor’s bills. “Here’s the money you went begging for,” he tells her, tossing the money at her feet, “If you take it, don’t come back.”

Rosa heads to the windy city without a backwards glance. Rosa spends most of her first afternoon waiting in Latimer’s office. He calls later that evening and they go for a drive together. Neil doesn’t pull any punches and tells her that he plans to marry a society girl.

Understandably, Rosa is furious. “I came here, dragged myself on my hands and knees with no pride. Me, Rosa Moline! And you don’t want me, I’m not good enough!” she shouts, leaping from the car, “You showed me my place alright!”

In a bit of dialog that was used in the trailer, but cut from the print used for the MGM/UA video, Rosa concludes her tirade against Neil with the line that she was “Just good enough for a romp in the woods!”

Rosa gives herself a pep talk as she walks the gritty Chicago streets, “I’m not just any woman…I’m Rosa Moline.” Rejected, rain soaked and laughed at by vagrants, Rosa begrudgingly admits defeat and returns to Loyalton where Louis takes her back without question. Later, Rosa tells her husband that she’s going to have a child.

At a grand birthday party Carol has thrown in Moose’s honor, Rosa square dances with the other townsfolk before slipping away for a clandestine meeting with Neil who has flown in especially for the party.

Neil has called off his engagement and tells Rosa that she’s what he really needs, “I’ll doll you up Rosa, hang diamonds on you like a Christmas tree and then I’m gonna trot you out and say ‘Look, this is the kind of woman I want, a woman with guts’ and you can wipe your feet on all of them.”

Happiness seems to be within Rosa’s grasp. But Moose brings things to a halt the next morning. While everyone prepares for a hunting party, he tells her, “I’m on to you and Latimer. You’re something for the birds Rosa.”

“And you’re something to make the corn grow tall.” Rosa is too close to achieving her dreams to let an old man stand in her way. With her keen marksman’s eye, she makes sure that Moose won’t be telling anybody anything.

At the inquest, Rosa pleads that the shooting was accidental. The judge believes her. After the trial and Moose’s funeral, Neil postpones his plans with Rosa. If they ran away together it would look too suspicious. He returns to Chicago, leaving Rosa to stew in her hatred and ambitions. It isn’t long before she reaches the boiling point.

“After I’ve told you a few things,” she shouts at her husband, “you may not want me or my baby.” She confesses to the affair and to killing Moose. “I’ve been hunting all my life, did you ever know me to miss?”

One afternoon, Rosa disguises herself in her maid’s ratty street clothes and takes a bus to the next town. Louis follows his wife and picks her up from a nondescript office. We’re shown the business plaque outside the attorney’s office and are led to believe that Rosa is seeking a divorce. As originally scripted, Rosa was waiting to see a doctor, in hopes of getting rid of the baby.

The scene that follows was also subject to censorship. In certain parts of the country it was cut from the film. As Louis drives his wife home, Rosa leaps from the car and down a steep embankment in a reckless attempt to induce a miscarriage. Whether or not she lost the baby is never revealed. We assume that she did when we’re shown Rosa recuperating in bed at home.

In a single afternoon, things go from bad to worse. A victim of blood poisoning, Rosa becomes feverish and incoherent, rambling on and on to her husband about the things she never had. “You really hate me don’t you?” she slurs, “You finally got the guts to hate me… well congratulations!”

Louis must drive to the next town to get her more medicine. While he’s away, Rosa gets dressed and prepares to leave. “The choo-choo’s gonna carry me away.” Sweaty, disheveled and stumbling around as if she’s drunk, Rosa enlists her maid’s help in putting on her cha-cha heels.

“Chicago, Chicago, that toddling town…” she mumbles as she paints on her make-up and makes her way through town to the train. Onward she trudges, the trains sharp whistle a seductive siren’s song to her feverish brain. Finally, mere steps from the depot, she collapses as the train leaves for Chicago without her.

Louis arrives at the station to find Rosa face down in the dirt where, like the scorpion, she has stung herself to eternal death…or something like that.

In conclusion: Beyond the Forest was an unequivocal flop when it was released. Bette Davis received the worst reviews of her career, something even Davis herself couldn’t argue with. In the 1974 biography Mother Goddam, Davis says that among the film’s many problems was that, “It was terrible because I was too old for the part.”

Indeed, casting a 40-year-old actress as the most dissatisfied but desirable woman in town was just one on the countless decisions that doomed Beyond the Forest from the moment shooting began. It was the cumulative power of those behind-the-scenes blunders that resulted in a bad movie perfect storm.

Another problem was the casting of amiable Joseph Cotton, “Why should any wife want to get away from him?” Davis questioned. Why indeed? The entire premise of the film depended on the fact that Davis, who looked positively frumpy in her Edith Head costumes, was supposed to be the hottest thing around and desperate to escape to the big city. If a grown woman such as Rosa hated living with a nice small-town doctor, why didn’t she just leave? Upon close examination, nearly all the motivations and plot twists fall apart…they simply don’t make any sense.

Perhaps this is why Davis, in an attempt to overshadow the story’s shortcomings, cranks her performance up to eleven, achieving a level of self-parody that is truly breathtaking. Director King Vidor certainly wasn’t going to ask her to tone it down. To Vidor, subtlety was anathema. Before undertaking this film, he’d proven that no dramatic situation was too over the top with the classics Duel in the Sun (1946) and The Fountainhead (1949).

Beyond the Forest is also the film that ended Davis’ long association with Warner Brothers. Both Jack Warner and Davis were dissatisfied with the movie and, as the film neared completion, Davis threatened to walk off the picture if Warner didn’t release her from her contract. Jack Warner was fed up with Davis’ constant demands and Davis was tired of her continual struggle for quality projects. After eighteen years they parted ways.

Bette Davis had a long career filled with roles that not only proved her range as an actress, but also proved that she was one of the very best in her profession. But every actor, no matter how good, has a few flops on their resume. Film scholars might do well to compare the achievements of Now Voyager (1942) or Jezebel (1938) with films like Beyond the Forest simply because the disparity is so intriguing.

Beyond the Forest is, quite simply, a towering achievement in camp/cult cinema and is not to be missed. 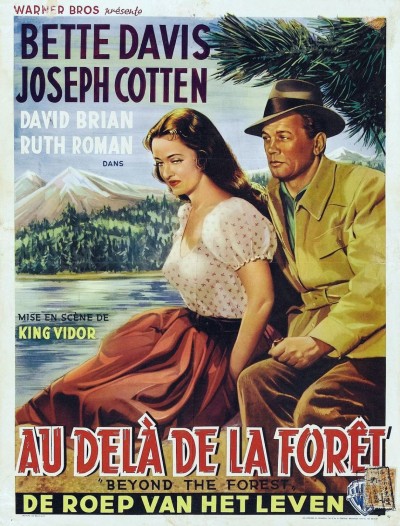 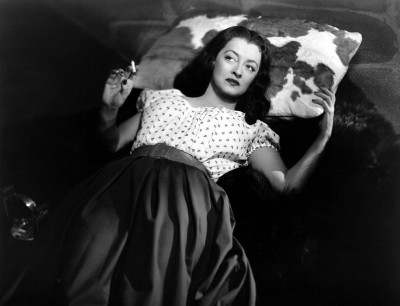