The names and places didn’t matter… only when!

What it’s all about: Though she was twenty-eight at the time, Suzanne Pleshette plays Grace Caldwell, a teenage jezebel with A Rage to Live (1965). One afternoon, as she changes out of her school clothes, Grace is watched by her brother’s friend Charlie Jay (Mark Goddard of television’s Lost in Space). After some snappy banter with her uninvited admirer, she announces that she’s going to take a shower. “Maybe I could scrub your back?” he suggests.

“That would be dull.” Grace deadpans. Unwilling to take no for an answer, Charlie wrestles her onto the chaise lounge. Trying to fight him off, she shouts, “I hate you.”

“Bet you don’t hate this,” Charlie growls as he kisses her. Proving that there is indeed a thin line between love and hate, Grace submits to his brutish advances.

Grace’s mother is worried about her daughter’s behavior. After a prolonged absence from a party one evening, she goes looking for Grace, only to find her in the drive-way, in the backseat of a car. Grace explains that she was “Just getting some air.” In the backseat of a Chevy?

Grace’s mother confesses her concerns to the family doctor during a checkup. With a rather progressive attitude, he espouses this child raising gem, “When they’re fifteen years old we tell them, sex is dynamite…don’t touch it. Six or seven years later they come around, tell you they’re gonna get married, you say, ok fine…play with the dynamite.”

Meanwhile, Grace is partaking in some afternoon delight with Charlie Jay in the basement rec room of his family’s split-level ranch. After being caught by Charlie’s mom (Brett Somers of television’s Match Game) Grace isn’t ashamed, but indignant, and walks out with her head held high.

“Charles, tell your father what Grace Caldwell was doing here, that sweet, refined, little slut.” After an interrogation by his disciplinarian father and ball-busting mother, Charlie side-steps responsibility by telling them that he isn’t the only one Grace has been with.

After receiving a neighborly phone call, Grace’s mother confronts her about the affair. Knowing that it’s no use playing the innocent, Grace downplays the scandalous accusations. “We were necking, just necking. I don’t expect to get a gold star for that, but it’s a long way from what she’s talking about.”

Some clarification is in order, “What do you call necking?”

Like a wild animal backed into a corner, Grace lashes out, “I told you nothing happened!”

“Very well dear, I’ll take your word for it.” Though she knows very well that her daughter has become the town tramp. Moments later, Grace rushes downstairs to find that her mother has collapsed.

After a doctor’s exam, rest and relaxation are prescribed for her “condition”. Grace’s older brother (much, much older, he smokes a pipe for crissakes) comes home from Yale to handle the situation. He insists that Grace reform or risk their mother’s life. When asked about her affair with Charlie Jay, Grace attempts to explain her sexual compulsions, “I don’t care how it sounds. When I feel that way, I can’t think of anything else. Doesn’t matter who I am or what I’m supposed to be. Nothing matters. I can’t help it.”

At a country club Christmas soirée Grace is fixed up with reputable Sidney Tate (Bradford Dillman). When a drunken Charlie almost ruins their evening, Sidney gallantly defends her honor. After a tame goodnight kiss, grace sums him up, “You’re very nice Sidney.”

While on vacation in the Bahamas, Grace plays nursemaid to her ailing mother. Despite a respectable beau back home, Grace begins to feel that familiar itch, and she needs it scratched. She sneaks out of her room for a moonlit rendezvous with a hotel employee. When Grace returns she finds her mother on the floor, the victim of a fatal heart attack.

After a respectable mourning period, Sidney proposes marriage and Grace decides to come clean about her past. “I’ve done some foolish things, some bad things. They weren’t meant to be bad but…well, I guess you know what I mean. I’m ready to give all my love to you Sidney, but I had to tell you.”

After her white wedding (who is she kidding?) Grace manages to achieve a certain level of suburban bliss, a husband, a country house, and a son of her own. It even looks as if Grace has squelched her sexual compulsions, until contractor Roger Bannon (Ben Gazzara) arrives to do some handiwork.

When a girlfriend picks her up for a day of shopping and sees the swarthy looks Roger is giving Grace, she asks, “Grace is everything alright?”

One rainy afternoon, after a cozy ride into town, Roger confesses his long standing obsession with Grace. “From the first time I saw you I haven’t been able to stop looking. Not that I wanted to stop. Looking at you became one of the big pleasures in my life. Maybe the biggest. And all that time, I’ve been wanting you. And I guess I’ll go on wanting you until they shovel me into the ground.” That’s all she needs to hear. After a passionate afternoon in his office, they begin a steamy affair.

After seeing her flirt with newspaper editor Jack Hollister (Peter Graves), Roger confronts Grace on the country road that leads to her house. “I’m in love with you. Sure, I know, we started off like a couple of animals, but it’s not like that any more. Oh Grace I need you.” He sees a future for them, but she has no intention of sacrificing her family. Grace takes off in her car, nearly running him down. “Rich, lousy, slut!” he shouts after her.

Later, at a roadside motel, Roger takes out his frustrations on an innocent woman, “Whores! You’re all whores!” He causes such a commotion that the police are called and a car chase ensues. After taking a turn too fast, Roger flips his truck and it explodes.

Jack Hollister hushes up the true circumstances behind Bannon’s death to protect Grace. When he returns home to his lush of a wife Amy, she lashes out at him, thinking he’s late because he’s sleeping with Grace. With their relationship in shambles, Jack announces that he’s ending their marriage. “You’re leaving me for that tramp?!”

Watch out Grace. As they say, hell hath no fury…

The next day, Grace prepares for the women’s auxiliary charity event that she’s hosting. Word of Roger Bannon’s half-mad ravings about Grace on the night of his death eventually make their way to Sidney. When he confronts her, she tearfully tries to make amends, “I never loved him. Not for a second.”

“There’s no love or regret here, you’re just sorry you got caught. Well, you said to hell with the rules, and to hell with me, so Grace…the hell with you.” After the charity carnival he plans on leaving and taking their son with him.

Its big drama under the big top when Amy comes searching for her estranged husband. Grace tries to take Amy outside, but angry and belligerent, she wants everyone to hear her tale of woe, “Get your hands off me, I’ll say whatever I want.”

Attempting to control the situation, Grace tells her to, “Shut up.”

“You steal somebody’s husband and she’s supposed to shut up? You don’t have that much money you tramp!” Grace slaps her and Amy crumples to the ground, a sobbing, emotionally broken woman.

Under the mistaken impression that she’s had affairs with Bannon, Jack Hollister and God knows who else, Sidney’s had enough and leaves to pack his bags. Grace runs after him, but is left alone to finally realize that her search for physical love has destroyed the only true love she has ever known. “Oh my God…Sidney.”

As the soundtrack swells to an orchestral cocophany of gothic strings that bring to mind pain, suffering, and eternal damnation, this moralistic prolog appears on screen:

Wise wretch! With Pleasures too refin’d to please;
With too much spirit to be e’er at ease…
You purchase Pain with all that Joy can give
And die of nothing but a Rage to live.

In conclusion: A Rage to Live (1965) and Butterfield 8 (1960) are cinematic siblings, of sorts. Both are based on books by John O’Hara, and both tell the story of a tramp trying to achieve respectability, only to ruin the lives of those she loves. Butterfield 8 is the more popular of the two because of Elizabeth Taylor’s Oscar win and her behind-the-scenes shenanigans with co-star Eddie Fisher. But with moody black and white photography and a delicious performance by Suzanne Pleshette, A Rage to Live deserves the same attention as its Academy Award winning sister. 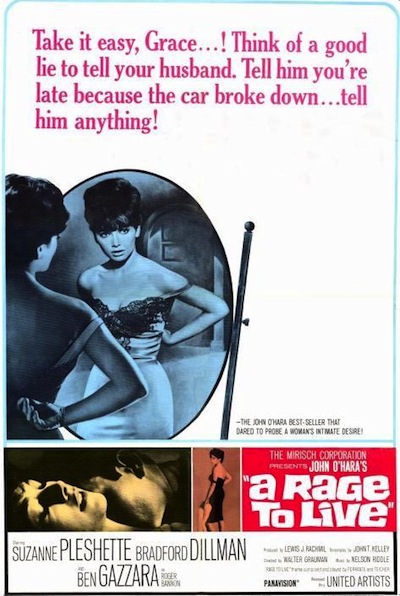