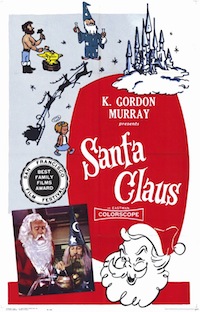 Calling one of producer K. Gordon Murray’s Mexican-made flicks bizarre is like calling the sky blue or saying that corn flakes are crunchy… it’s simply a given. But words cannot express the severity of holiday weirdness on display in Santa Claus (1959) a children’s fantasy that mixes religious and secular traditions in an intoxicating brew that is sure to leave even the strongest bad movie fan with an unforgettable holiday hangover.

What it’s all about: The parade of the bizarre begins with a castle floating in the clouds. No, it’s not Mount Olympus, home of the Greek Gods. Santa, it seems, forgoes his traditional workshop in the frozen North for a palace in the sky where he can keep a God’s eye view on the children of earth.

Santa sits at his pipe organ, which is outfitted with a viewing screen, to check in on Toyland, a sweatshop where the children of many nations make the gifts he’ll deliver on Xmas eve. “Here are gathered the boys and girls of different races and creeds,” explains the omnipresent narrator, “They have come from many lands to help Santa bring joy and happiness to all of the Earth’s children.”

The workers don’t really work, they stand around in their native garb singing indigenous folk songs, much like a live-action version of Disneyland’s “It’s a Small World”. The looks on the kid’s faces range from mild indifference to outright boredom as the camera captures their multi-cultural performances. The African children hop around in leopard skin loincloths banging on drums while the Mexican children sing “La Cucaracha”. The kids from the U.S. warble “Mary had a Little Lamb” and are dressed like miniature versions Roy Rogers and Dale Evans.

Meanwhile, in the fiery pits of Hell, Pitch the devil leads his brethren in a production number. Lucifer tells Pitch to knock it off and get down to some evil doing, “If you do not succeed in making all the children of the Earth do evil, you will be punished!”

Wishing to avoid the forced consumption of chocolate ice cream, Pitch heads to Earth where three young hoodlums immediately catch his eye. How can we tell they’re bad? They wear leather motorcycle jackets of course. Pitch provides them with rocks that they throw at a Christmas window display. “Nothing that happens on Earth is unknown to Santa Claus,” the narrator reminds us. Santa definitely knows something is amiss and asks his young friend Pedro to check in on the children of earth.

“By the magic powers look for the child we are seeking,” Pedro commands, “whether she is in a cave or behind a million mountains.” Santa’s magic observatory is filled with strange machinery the likes of which even Dr. Seuss couldn’t dream up. Using the Master Telescope (which comes complete with a retractable and slightly creepy “Master Eye”) they locate little Lupita at a Mexican Xmas carnival.

At Pitch’s urging, the adorable little ragamuffin considers stealing a doll from a street vendor. Lupita puts the doll back much to Santa’s delight, “Hooray for her! Hooray for her! All my friends can ignore the devil! All they need to win is to be good in spirit.”

He next checks in on poor little rich boy Billy. Though Billy is asleep, it doesn’t stop Santa from prying into his mind with the Dreamscope. Billy fantasizes of unwrapping refrigerator-sized boxes on Christmas day. “Why they contain what a child loves best,” the narrator gushes as Billy opens his gifts, “His parents!” Wow. Talk about mid-century social conditioning.

“A dream is a wish the heart makes,” Santa declares after witnessing the touching scene. Since Disney doesn’t take kindly to copyright infringement, let’s hope Santa has a good legal team on retainer. Santa checks in again on Lupita, who dreams of the doll she so desperately wants. Thanks to Pitch, the dream becomes a nightmare as little Lupita is surrounded by two-faced, dancing zombie dolls! While the dolls spin and twirl, the young actress playing Lupita looks to the camera as if to ask, “WTF!?!” Where is the child safety board when you need it?

“You must be evil if you want a doll,” a satanic dancing toy tells her.

“To steal is evil and I don’t want to be evil.”

At the post office, bags of Santa’s mail get tossed into the furnace, where the letters rise up on the smoky air to Santa’s heavenly home. Santa is really, really happy to be buried in mail. After sorting through some of the letters, Santa visits Merlin’s laboratory. While preparing Santa’s “magic stardust”, the wizened wizard engages in some schtick that does little more than pad the running time. Santa heads down the hall to visit Vulcan, iron forger to the Gods and maker of magic keys.

Santa’s slaves… er, helpers of many nations, prep Santa’s sleigh and white plastic reindeer. “Don’t forget,” Pedro insists, “You’ve got to return to the castle ahead of the sunrise because the sun will turn the reindeer into dust.” Huh? Are they vampire reindeer? No, Santa takes out a giant key and winds them up. So… they’re oversized mechanical vampire reindeer? Does this make any sense?

“Be off my reindeer and glide through the heavens as fast as you can go! May my palace of gold and crystal enjoy peace and Jesus the Son of God join us on earth so that we can all have joy and good will!” And with that odd request for the resurrection of Christ, Santa is off on his yuletide deliveries.

On earth, Billy’s parents tuck him in bed before leaving for a night out on the town, while the three little hoods hide on a rooftop scheming about kidnapping Santa Claus. Lupita has a heart to heart with her mom, explaining that if Santa brings her two dolls, she’ll share one with little baby Jesus.

Santa parks his sleigh in the clouds and climbs down a rope ladder to begin his deliveries. Pitch makes a few half-assed attempts at thwarting him, but nothing can keep St. Nick from his gift-giving errands. Billy awakens to find Santa Claus in his living room, “Santa Claus! You love me don’t you? Say you love me Santa!”

Billy has everything but the love of his mother and father. Santa gives him a very special gift… a guilt trip for his neglectful parents. At their chi-chi soirée, a “waiter” slips them a magical holiday Mickey that reminds them that they have a son at home all alone. A merry Christmas Eve reunion takes place. Billy’s dream has come true.

Pitch tries to enlist the help of the troublesome trio in putting a stop to Santa’s do-gooding ways. A comet (or something) passes by, scarring the kids into abandoning their plot. They hurry home to discover lumps of coal in their stockings.

At his next house, Santa forgoes the traditional rooftop delivery and traipses through the front yard instead. Pitch sicks the family dog on him, forcing Santa up a tree. Pitch then awakens most of the neighborhood so that they can all witness Santa’s embarrassing predicament. The police and fire department race to the scene, while the family inside the house draw their weapons, preparing to shoot any intruders they find.

Using the Tele-talker machine in Santa’s observatory, Pedro and Merlin overhear Santa’s cries for help and suggest he use a toy cat to distract the ferocious canine. Once the hellhound has been dealt with and Pitch has been drenched by the fire department, Santa makes a run for it. “I still have one more friend to visit, I mustn’t fail her.”

Lupita awakens as her father returns from a long night of job hunting (He spent all Xmas Eve looking for work? Sure, that makes perfect sense). Lupita runs outside to find a doll as big as she is. Her mother makes the sign of the cross. It’s a Christmas miracle!

As Santa’s sleigh rockets through the heavens, the narrator concludes with this, “Once again Santa returns to his palace from his yearly Christmas rounds. He is happy and gay, for once again he has brought joy to the children of the world.”

The holiday adventure is wrapped up with this sentiment presented on a needlepoint sampler, “Blessed are those who believe, for they shall see God. Peace on earth. Good will toward men.”

In conclusion: Audiences have K. Gordon Murray to thank (or blame depending on your point of view) for bringing Santa Claus to American movie houses and TV screens in the mid 60’s. The Florida based producer repackaged and dubbed Mexican product for the U.S. market and became particularly well known for the kid’s matinée titles he distributed. Murray rarely copyrighted these films and, after their initial run in theaters and on television, most of them faded into obscurity. Long in the public domain, Santa Claus can usually be found for free online or in stores around the holidays on budget priced/no-fills DVD.

2013 marked the Blu-ray premiere of this odd holiday classic. Fully restored and loaded with kitchy bonus features, Santa Claus can now be enjoyed in all it’s wonderfully wierd HD glory! 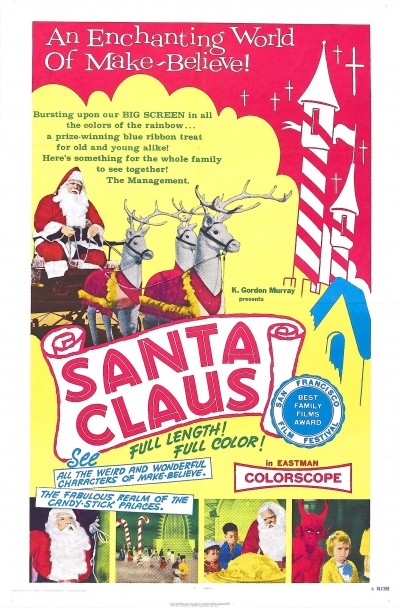