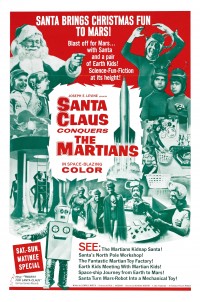 Kiddie matinees were a weekend mainstay in many small town movie theatres from the early 50’s until the mid 70’s. Mom could drop the kids off at the picture show while she ran errands and did the shopping. These matinees were often filled with second run family films, animated classics (mainly Disney) and low-budget fare. The holiday film Santa Claus Conquers the Martians (1964) definitely belongs in the latter category. It was produced specifically with the kiddie matinee and television market in mind.

What it’s all about: After the bouncy theme “Hooray for Santy Claus” (featuring a children’s chorus that sounds like it was on loan from Peter Pan records) we go straight to a pre-holiday news broadcast from KID TV. The on-the-spot reporter makes a few lame North Pole jokes before a live interview with Santa Claus (John Call). The Big S is as jolly as you might expect, though the frenzied pace of the holiday season has left him so scatterbrained that he refers to one of his reindeer as “Nixon.”

On the planet Mars, Kimar (Leonard Hicks) worries that his children are spending too much time in front of the video set. Bomar (Chris Month) and Girmar (Pia Zadora) placidly watch earth programs. They won’t eat and they won’t sleep. “Something is happening to the children of Mars.”

In a smoky Martian forest where the alien trees are made of two by fours draped with synthetic angel hair, Kimar and members of the counsel consult Chochem (Carl Don). The ancient one appears in a magical puff of smoke and proclaims that Martian kids are just too serious. “They must learn what it means to have fun,” he croaks, “We need a Santa Claus on Mars.”

“Desperate problems require desperate deeds,” declares Kimar, “Earth has had Santa Claus long enough.” Kimar and his crew blast off in their rocket ship but are confused when they find a Santa Claus on nearly every earth street corner. “With so many, they won’t miss one.”

Voldar (Vincent Beck) the mustachioed Martian antagonist gripes, “All this trouble over a fat little man in a red suit.”

When the Martians land, they encounter young Billy (Victor Stiles) and Betty (Donna Conforti). “What are those funny things sticking out of your head?” precocious Betty asks.

“Those are our antennae.”

“Are you a television set?”

Precocious it seems, but not too bright.

Voldar calls them nincompoops before dragging them along to the North Pole. When the children hear of the Martian’s kidnapping plot, they make a quick getaway in hopes of warning St. Nick. A guy in a shabby polar bear costume briefly menaces them before Torg the futuristic robot (played by a guy in an even shabbier cardboard robot costume) captures them. Billy and Betty are taken back to the spaceship while the Martians use Torg to raid Santa’s workshop.

The oversized toy doesn’t threaten Santa, though after a close inspection he declares that Torg is “very well-made”. Voldar uses his Wham-o air blaster to freeze Santa’s helpers. “We don’t want to hurt you Santa, so come along quietly.”

The kidnapping of a seasonal icon makes international news on earth. Voldar can’t stand that the jolly old elf handles his abduction with such a cheery disposition. After some expositional dialog that clearly spells out the jeopardy they’ll soon face, Voldar places Santa, Billy and Betty into the ship’s air lock and blasts them into space.

An embarrassingly hokey fistfight ensues when Kimar learns of Voldar’s treachery. But he needn’t fear, Santa and the children escape certain death with the help of Santa’s magical yuletide powers.

Kimar brings Santa to his space age Martian home (complete with a tower of crystal fountain by Dawson of N.Y.C.). Santa does a meet and greet with Kimar’s family, “I’m not accustomed to entering people’s homes through the front door, but you have no chimney.” At first Bomar and Girmar eye Santa suspiciously, but the holiday spirit proves to be contagious. They’re soon laughing it up for no apparent reason.

Holed up in a cardboard cave, an excommunicated Voldar plots his revenge along with his dimwitted compatriots. “We cannot eliminate Santa Claus, but we can discredit him.”

Meanwhile, Santa oversees toy production in his high-tech Martian workshop. With the push of a button, toys roll off an assembly line. “That’s automation for you.”

Once Santa has retired for the evening, Voldar and his crew engage in some tepid slapstick before sabotaging the toy machine. When Santa and the children arrive for work the next day, the machine spits out defective toys.

Droppo the Martian (Bill McCutcheon), whose only purpose so far has been to provide annoying comic relief, shows up dressed like Santa. Voldar mistakes him for the real Santa and takes him hostage. Voldar soon realizes that he’s got the wrong earthling and returns to the workshop to get the genuine article. Billy, Betty and the Martian children fight him off with a barrage of toys that they let loose with gusto. Despite the fact that he’s carrying a Wham-o freeze gun, Voldar is easily defeated. The only thing left for everyone to do is have a hearty good-natured laugh.

When Santa sees Droppo in his signature seasonal attire, he declares that, “You don’t need me here. You’ve got a wonderful Santa Claus of your own.” With the Jeudo-Christian holiday tradition firmly established on another planet, Santa’s work is done. “Merry Christmas everyone…Away!” he dramatically declares as if he were making a magical exit. Instead, he just walks out the door.

A reprise of the theme song follows as the rocket ship with Billy, Betty and Santa returns to earth. Once the end credits finish, karaoke lyric appear on the screen so that the young (and the young at heart) can sing along with all the happy children of the world.

In conclusion: Santa Claus Conquers the Martians has always maintained a certain level of notoriety among cult film buffs. It experienced a mainstream surge in popularity when it was featured on a memorable episode of Mystery Science Theatre 3000. Aside from the nostalgia it offers to those who spent their holidays in front of the warm glow of a console TV, the movie’s biggest claim to fame is that it marks the film debut of a young Pia Zadora. Who could have guessed that the adorably chubby little girl Martian would grow up to bare it all in the pages of Penthouse and in cult films like The Lonely Lady (1983).

Another charming part of Santa Claus Conquers the Martians is its rock bottom production vales. All of the sets have a two-dimensional feel, as if they were once part of a grade school Christmas pageant. Every scene in the film (including those that take place outdoors) was shot at the Michael Mayerburg Studios in New York. In actuality, the “studio” was a retrofitted aircraft hanger on Long Island. It’s hard not to admire the filmmaker’s can-do attitude.

The original copyright for Santa Claus Conquers the Martians long ago fell into the public domain. Countless companies have distributed it on video and DVD over the years and most of them used the same worn-out source print. The battered nature of Santa Claus Conquers the Martians adds a certain retro appeal, like you’re watching it on the late, late show on a local UHF channel.

But if HD is more your thing, Santa Claus Conquers the Martians made it’s Blu-ray debut in 2013.

Equal parts holiday, family and low-budget sci-fi film, Santa Claus Conquers the Martians has a genre defying charm that can be enjoyed any time of the year.