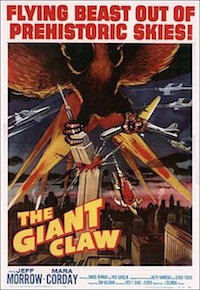 An endless array of low-budget atomic beasts, oversized insects and invaders from space assaulted movie houses and drive-in screens during the 1950’s. But it’s hard to imagine any single threat more preposterous that the goofy, winged wonder at the center of The Giant Claw (1957).

What it’s all about: Somewhere in the great frozen north (location courtesy of stock footage), Mitch MacAfee (Jeff Morrow) pilots a jet fighter as part of a test run for a new radar tracking station. On the ground, foxy mathematician Sally Caldwell (Mara Corday) and several air force personnel scrutinize his progress. A narrator (director Fred F. Sears) helps set the stage, “An electronics engineer, a radio officer, a mathematician and systems analyst, a radar operator, a couple of plotters. People doing a job, well, efficiently. Serious, having fun. Doing a job. Situation normal… for the moment.”

A mysterious, shadowy object streaks past Mitch. Despite the importance of the moment (it sets up the entire plot), dialog is disregarded in favor of more narration, “Something, he didn’t know what, but something as big as a battleship had just flown over and past him at speeds so great he couldn’t begin to estimate it.”

Mitch is later told that, despite what he may have seen, no radar picked up anything unusual. On the flight back to New York, something unknown forces Mitch and Sally’s plane down. A wonderfully obvious model plane on wires makes a fiery crash landing. Mitch and Sally pull Pete the pilot from the flaming wreckage. After the pilot is taken to the hospital, Mitch and Sally spend the night with helpful Canadian woodsman Pierre Broussard (Louis Merrill). Their host becomes terrified after seeing what he believes is the legendary La Carcagne. A state trooper tells them that, “According to the story they tell, if you see this big bird, it’s a sign that you’re gonna die real soon.”

Our hero and heroine are soon on a commercial flight bound for NYC and Mitch takes the opportunity to smooch mademoiselle mathematician. “You almost overwhelm me,” Sally coyly hints as they proceed with some romantic banter (or what passes for romantic banter for these two). After running a baseball metaphor into the ground, Mitch gets a flash if inspiration and asks to see a topographical map Sally happens to be carrying with her. He plots out the spiral pattern of sightings and recent aircraft disappearances. Sally finds it hard to believe that one single thing could be responsible for all the odd occurrences. “Mitch MacAfee, flying Sherlock Holmes.”

The next day, an investigative team flies out to the site of the earlier plane crash. They never reach their destination. After nearly thirty minutes of screen time, we finally get a good look at the title creature and boy, is it a doozy! The Giant Claw is an outlandish cross between a turkey and a buzzard. This googly-eyed creature, with its frizzy topknot and gap-tooth grin, is hands-down, one of cinema’s most ridiculous monsters. Ever.

With a squawking battle cry, the Giant Claw attacks the plane. To see the rubbery marionette chasing after the model plane is to experience unadulterated bad movie bliss! It just doesn’t get any more ridiculous than this. The passengers bail out, only to be gobbled up by the ferocious flying fiend.

Sally and Mitch are brought before General Buskirk (Robert Shayne) to help figure out the cause of the recent disappearances. Planes continue to vanish without any trace of what may be snatching them from the sky. Though there is still no tangible evidence, one of the pilots radioed that, “A bird as big as a battleship circled and attacked the plane.”

Sally chooses this moment to remember that she was doing some “Earth curvature calibration work” and that perhaps one of the cameras in an observation balloon caught the creature on film. As they click through the slides, Sally gasps in horror when one of the photographs reveals the giant buzzard smiling for its close-up.

In Washington, General Considine (Morris Ankrum) assures them, “There’s a general air alert on this very minute. We’ll find it all right. Never fear.” They soon receive word that the bird has been spotted and he gives the order to shoot it down. “This should be the end of the big bird who was there… but wasn’t.” Sitting in the general’s office, they listen on the radio as the attack takes place.

To create the scene, footage of the bird puppet was spliced together with plane footage from Mission Over Korea (1953) a film also directed by Fred F. Sears and released by Columbia. The Giant Claw destroys or eats each of the jet planes. Both Buskirk and Considine are visibly shaky and a little bit bitchy when Mitch asks what they’re going to do next. “Ten million dollars worth of radar can’t track it. Enough firepower to wipe out a regiment can’t even slow it down.”

At a government research facility, the deadpan Dr. Noymann (Edgar Barrier) explains his cockamamie theory concerning the creatures origins, “The bird is extraterrestrial. It comes from outer space, from some godforsaken antimatter galaxy millions and millions of light years from Earth. No other explanation is possible.”

Umm, okay. Sure, whatever.

The bird is enclosed in an antimatter shield that makes it undetectable to radar and impervious to any known weapon. While the military consults with the president, the narrator chimes in, “The bird revealed itself to the world at large and complacency quickly turned to panic. Panic, terror and horror. No corner of the earth was spared the terror of looking up into God’s blue sky and seeing the feathered nightmare on wings.”

Mitch and Sally bounce bird theories back and forth, like some kind of intellectual foreplay (or what passes for intellectual foreplay for these two). With female intuition on her side, Sally figures it all out, “Gen. Buskirk told me they found the mark of a giant claw on a field next to Pierre Broussard’s farm, and I know why. The bird came here to build a nest.”

After a quick jaunt back to Canada, they find the big bird tending its nest. “You shoot gun, make big noise,” Pierre frets in his broken English, “La Carcagne come and we all die.” They blast several holes in the giant egg and incur the wrath of the buzzard from another world. Pierre is killed, but there is no time for mourning.

“With that bird around it’s too dangerous to fly,” Mitch reasons, “We’ll leave the chopper and take Pierre’s car. He won’t be needing it.” A quartet of thrill-seeking teens passes them on the road. The Giant Claw swoops down, plucks up their hot-rod, and carries them away.

Back in Washington, Mitch regales Gen. Considine with his latest idea on how to thwart the big bird, “Now, if this thing of mine works and we get close, real close, and bombard that bird’s antimatter shield with a stream of mesic atoms… the bird would be defenseless, except for beak, claws and wings.”

While Mitch, Sally and Dr. Noymann get to work, the bird terrorizes a toy train chugging its way across a miniature tabletop landscape. The scientist experience failure after failure until an explosion rocks the laboratory. “The explosion was no accident,” Mitch insists, “I did it on purpose. I used the mesic atom projector!” They quickly outfit an old bomber with the weapon and take to the air just as the creature begins its attack on New York, tearing the top off the Empire State building. They manage to lure the bird away from snacking on the U.N. as panicked extras flee from the crumbling New York skyline (footage courtesy of 1956’s Earth vs. the Flying Saucers, yet another film directed by Fred F. Sears).

In the cargo hold of the bomber, Mitch finishes hooking a pair of massive vacuum tubes to his atom projector and lets the big bird have it. A simple puff of smoke signals the disabling of the creatures antimatter shield. A few rockets are all it takes to bring down the big bird. With their mission accomplished, Mitch and Sally happily embrace as The Giant Claw sinks beneath the waves.

In conclusion: The Giant Claw is a dubious cinematic achievement by anyone’s standard. Yet no careers were harmed in the making of this picture. Jeff Morrow continued to work steadily in film and television throughout the 50’s and 60’s. Some of his other genre credits include This Island Earth (1955), The Creature Walks Among Us (1956) and Kronos (1957). Mara Corday got her start as a model before moving on to films with Universal International, where Morrow was also under contract. Some of her other memorable films include Tarantula (1955) and The Black Scorpion (1957). Despite his relatively brief tenure in the business, director Fred F. Sears was prolific, garnering an impressive list of credits, working in several different genres (sci-fi movies, westerns, J.D. flicks). Though he passed away a few months after The Giant Claw came out, he’d completed five more films that were released in the year following his death.

Low-budget producer Sam Katzman worked in every conceivable film genre beginning in the 30’s and continuing through the early 70’s. A hundred box sets wouldn’t even begin to cover the output of this seemingly inexhaustible showman. Presumably, animator Ray Harryhausen, who Katzman had worked with successfully on Earth vs. the Flying Saucers and It Came From Beneath the Sea (1955), would have handled the special effects for The Giant Claw. Harryhausen was busy with another project (20 Million Miles to Earth, 1957) leaving cost conscious Katzman to make the inspired choice to hire a model-maker based out of Mexico City. The rest, as they say, is history. No one involved with the production saw the final cut of the film (with all those very special effects) until it played in theaters. Jeff Morrow has told the story of how he attended the premiere of The Giant Claw in his own hometown, his friends and family laughing out loud at the bizarre bug-eyed buzzard flapping across the screen. He snuck out of the theatre before the final reel so he wouldn’t have to answer for any of the films obvious shortcomings.

The Giant Claw is one of the four films featured in the two disc DVD set Icons of Horror Collection: Sam Katzman. Disc one of the collection contains The Werewolf (1956) and The Zombies of Mora Tau (1957). On the second disc, The Giant Claw is paired with Creature with the Atom Brain (1955), a crime thriller that features a mad scientist who uses atomic zombies to do his evil bidding. All of the films look and sound terrific despite their age and poverty-row origins. The Giant Claw is presented in its original aspect ratio (1.85:1). Extras on the disc include an episode of the Katzman produced serial Mysterious Island and a collection of trailers (The Giant Claw, Creature with the Atom Brain, Earth vs. the Flying Saucers and It Came From Beneath the Sea).

So, is the big bird in The Giant Claw the absolute worst movie monster ever? Well, there is the walking carpet creature from The Creeping Terror (1964) and Tabanga, the South Seas tree God in From Hell It Came (1957).

A flapping, squawking, turkey marionette would definitely make the Top 5 though.