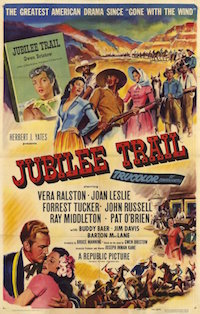 Sprawling, grand and epic are not the usual adjectives used to describe the product put out by Republic Pictures. Modest, but successful, westerns were the studios bread and butter. More money was spent on the acquisition, production and promotion of Jubilee Trail (1954) than any other Republic film up to that time. The posters even lauded it as, “The greatest American drama since Gone With the Wind”. One look at Jubilee Trail and it’s pretty obvious that this is no Gone With the Wind.

What it’s all about: Jubilee Trail opens with Vera Ralston prancing and flirting her way across a stage as the headliner in a New Orleans music box revue. This opening production number puts to rest any question as to who the real star of the film is. Florinda (Ralston) sings a French ditty, though ‘singing’ may be a bit of an overstatement. Ralston is barely able to keep up with the audio track, her mouth never quite matching up with the lyrics of the song she’s supposedly singing.

Moments after the show, Florinda changes from her sequined stage costume into an equally ostentatious gown and comes to the rescue of Garnet Hale (Joan Leslie) who is being harassed by a pair of riverboat gamblers. After a few moments of pleasant chitchat with the newlywed bride, Florinda disappears.

A detective is searching for Florinda. Though Garnett knows nothing about the flashy showgirl’s mysterious past and possible criminal history, she takes Florinda under her wing and hides her upstairs in the honeymoon suite. Garnet’s husband Oliver (John Russell) throws the detective and nosy hotel manager off Florinda’s trail. The Hales even go so far as to disguise the wanted lady and arrange for her safe passage out of town.

The newlyweds continue on to the California territory, stopping in Santa Fe. While Oliver goes to check on the wagon train transporting some of their supplies, Garnet hangs out with Florinda, who has also made her way westward. Florinda has found temporary work as a housekeeper for a fire and brimstone-spouting tradesman, whom everyone laughingly refers to as Deacon.

Late one night, the wagon train pulls into town. Trail boss John Ives (Forrest Tucker) has a special message for Oliver. In a detailed letter from his brother, it is explained that upon Oliver’s arrival in California, he will marry the local girl who has given birth to his child. One wife on the trail and another one waiting for him at home… what’s a poor guy to do?

Everyone gathers at the tavern that evening. Florinda is unable to resist entertaining the local yokels and bursts into song. With her obvious saloon-singing past exposed, the Deacon calls her a strumpet. Them there’s fightin’ words and since this is a western, Jubilee Trail needs at least one old fashioned bar brawl. Punches are thrown, fists begin to fly and stuntmen crash through prop furniture.

The next day it’s back to the trail. After trekking across picturesque desert vistas, they make camp by a watering hole. While pitching her tent, Garnet finds her husband’s letter and reads of the bride and baby awaiting him in California. Suddenly, Indians attack! Everyone, including the women folk, fend off the savages. Garnet is wounded by an arrow, but bravely pulls through, proving that it takes a spirited kind of gal to make it in on the wild frontier.

The wagon train soon arrives at the Hale hacienda. While preparing for the homecoming fiesta, Garnet asks Florinda the purely hypothetical question whether it’s better to know some bad news, or remain blissfully in the dark. “Oh, it’s better to know about it honey, that way you can fight it. And when you think you can’t fight, just feel that wound and remember… if you lived through that, you can live through anything.” At the party, Florinda takes a shine to bombastic Siberian fur trapper Nicolai (Buddy Baer) whom she lovingly nicknames ‘handsome brute’.

When Charles (Ray Middleton) learns of his brother’s marriage to Garnet, he is furious, “Your impertinence comes as easy as your follies. We would have controlled more land than any Americans out here if you’d married Carmelita.”

Oliver must finally tell Garnet. She foregoes the usual hysterics, “I feel sorry for you Oliver… and sorry for the girl and her child.” Garnet may be handling the situation stoically, but others… not so much. Word arrives that Carmelita has ridden off a cliff with her bastard child in her arms. The Velasco men storm the Hale ranch seeking vengeance and kill Oliver.

Now a widow, with a baby of her own on the way, Carnet continues with the wagon train to Los Angeles where she can start a new life, living in a little room above the saloon where Florinda works as bartender. Garnet waits patiently for her child to be born. Though “her time is not far away”, you’d never know it. Apparently, saying a woman was pregnant in 1954 was one thing, but showing said pregnancy was another thing altogether. John Ives tells her that California has officially become a state, “Now, if the baby’s a boy, when he grows up he can be president someday.”

Sourpuss Charles shows up demanding that Garnet return with him to the ranch, “I will not have my brother’s child born in a place like this!”

“You’re not going to have anything to do with this baby, you’re not going to have a chance to ruin his life like you did your brother’s!” The strain of her confrontation with Charles sends Garnet into labor. While Texas (Pat O’Brien), the loveable drunken doctor, delivers the baby upstairs, Florinda helps out the best way she knows how… by leading a saloon sing-a-long. After her number, Nicolai croons the title song, everyone in the bar eventually joining in.

The baby is strong and healthy and everything seems to be going well for our merry band of western misfits, at least until Charles comes riding back into town with a pair of hired guns. One of the ruffians tries to force himself on Garnet, but John Ives comes to her rescue with guns blazing, following the man out back for a moonlight shootout. John is clearly crazy about Garnet, but he’s never one to settle for too long and decides to hit the trail again. He leaves her with a single heart-felt kiss goodbye.

After a drunken fall, Texas lays on his deathbed. Garnet watches over her friend with her baby by her side. When Charles bursts in threatening to take the baby away forever, Texas shoots him dead, the last redeeming act of a dying man.

After all the excitement, Garnet and Florinda have a heart-to-heart. Florinda suggests that she go back east where it’s safer and she can marry a rich man. Garnet couldn’t possibly leave. She’s too in love with John Ives. Florinda admits that she too once loved a man, telling the tale of a husband who started a blaze in a fit of jealous rage, “The whole place was burning. As we fought, he fell into the flames. They say I killed him, but I didn’t. He died in the fire he started himself.”

With the villainous Charles taken care of, it’s time for the ladies of Jubilee Trail to decide their futures. Florinda is so distraught to learn of Nicolai’s return voyage home, that she prays for guidance. “Dear God, this is my first prayer, so don’t expect too much. I don’t know whether I want the handsome brute to come back here or not. So, I guess I’ll leave it up to you. But let him be happy, the way he is now, as long as he lives.” To be extra sure that her message doesn’t get lost in God’s in-box, she signs off, “…Florinda.”

Just then, John returns with news of a nearby gold strike. Florinda quickly forgets about Nicolai and plots her next venture, “Let them splash around in streams and break up rocks. When they’re cold and hungry and tired, then they can bring their gold into a little place I’ll have up there. I’ll carry the best food in town. There’ll be music and fun and I’ll get gold without digging for it!”

John finally professes his true feelings, “Every turn of the trail I came to, I hoped you’d be around the next bend.” He wants Garnet and the baby to join him in the adventure of the California gold rush.

“I don’t want to settle down and be safe any more than you do,” she tells him as they join Nicolai and Florinda in a toast to the bright future that lies ahead. In the closing shot of the movie, a heavenly chorus sings the praises of the Jubilee Trial as a wagon train heads onward into history.

In conclusion: By all accounts, Jubilee Trail is an average western (though it’s more soap opera than horse opera). The film would have faded into obscurity if it were not for one thing. It’s leading lady. Vera Ralston has developed a cult following as one of the worst actresses of all time. While calling her the absolute worst is a bit harsh, there is a certain mediocrity in her acting that is sure to appeal to any bad movie fan.

Born in Czechoslovakia, Ralston was a figure skater before she came to the U.S. in hopes of becoming the next Sonja Henie. She signed with Republic Pictures in 1943 and became the protégé of Herbert J. Yates. The studio head would later leave his wife to marry Ralston, spending the rest of his tenure at the studio trying to turn his young wife (Yates was 40 years her senior) into a star. Though she reportedly worked hard at her craft, Ralston never managed to be anything more than competent in the roles she played. No expense was spared in the making of Jubilee Trial, a film created entirely as a showcase for Ralston. The film did fine, though it certainly wasn’t the sensation that Yates was hoping for. He continued to give Ralston lead roles in films alongside such luminaries as Erich von Stroheim, Jimmy Stewart, Fred MacMurray and John Wayne. But audiences never took to her. With her heavy accent and limited acting range, Ralston never quite reached the heights Yates envisioned.

Jubilee Trail is not yet available on DVD. It is currently available (as of 2015) on Amazon’s Instant Video streaming service. 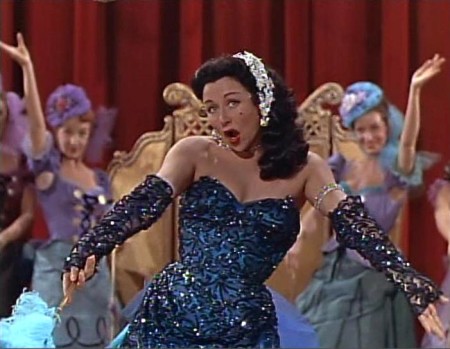 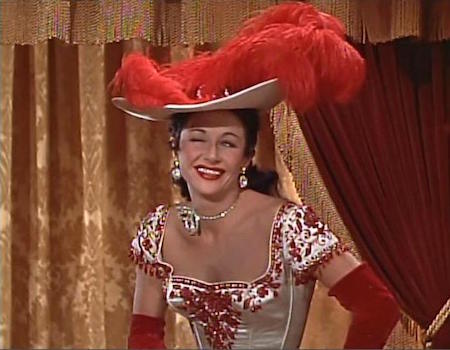 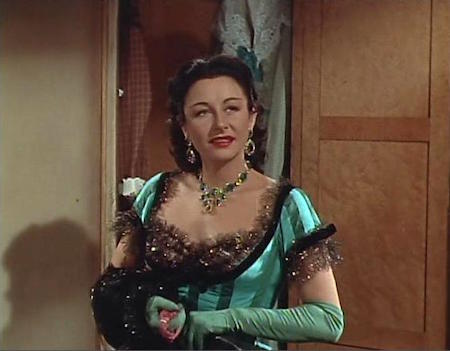 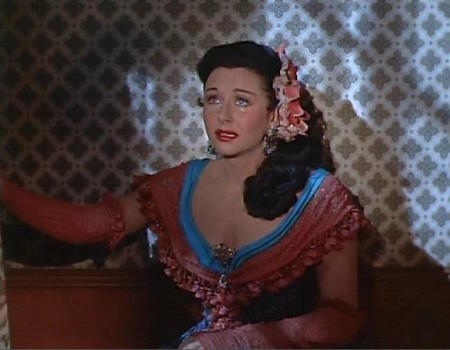