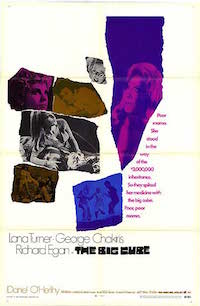 Poor mama. She stood in the way of a $3,000,000 inheritance. So they spoiled her medicine with the big cube. Poor, poor mama.

Less than a decade after such career highlights as Imitation of Life (1959) and Portrait in Black (1960) Lana Turner headlined The Big Cube (1969) a silly, trippy, LSD-soaked tale that tries to mix classic Hollywood melodrama (familiar territory for Turner) and the swingin’ sexed-up drug culture of the late 1960’s. The result is a colorfully spectacular mess, making it a savory treat for bad movie connoisseurs.

What it’s all about: It may seem like you’ve put the wrong disc into your DVD player, but the scenes from the low-rent historical epic in the opening moments of The Big Cube are merely the closing night of a play featuring glamorous stage star Adriana Roman (Lana Turner). After taking her final bows, she announces that she is “saying good-bye to the theatre forever” in order to marry wealthy business tycoon Charles Winthrop (Dan O’Herlihy).

After the groovy opening credits (featuring the muzak-style theme “Lean on Me”) you may think that Turner has already begun to partake in the mind-altering drug referenced in the film’s title. It’s the only logical explanation for her awkward performance in a scene where her character tells her husband-to-be that she’s worried how his teenage daughter will handle their impending nuptials.

Adriana tries to bond with Lisa after the civil ceremony. “We’re going to be the best of friends,” she insists, “we have the same good taste in men.”

That taste is put into question when Lisa starts hanging out with Johnny Allen (George Chakiris) and his thrill-seeking beatnik friends. Their first excursion is to club Le Trip, the kind of kinky, psychedelic dance club that only exists in movies from the 1960’s. “Sugar, in beer?” Lisa questions as all the hep cats start dropping The Big Cube.

A mysterious woman called the Queen Bee arrives with a muscular escort. Lalo (Carlos East) one of Johnny’s artist pals, wants revenge on the muscle head for some imagined indignity. “I’m gonna cube that mother, but good.”

They spike the guy’s beer with a heavy dose of LSD and it isn’t long before a full-scale freak-out ensues. “My face. Don’t steal my face!” the guy shouts as he goes into a psychotically spastic (and enjoyably hilarious) fit.

While investigating the drug-induced death at Le Trip, the police accuse Johnny of making LSD in the college chemistry lab. Kicked out of med school and with no other prospects, Johnny sets about wooing Lisa full-time. He moves in with Lalo, who is preparing for an exhibition of his third-rate artistic renderings. Lisa procures money from her father and buys one of the paintings. To celebrate the sale, Johnny and his dead-beat pals throw a swingin’ party at Lisa’s place. Bibi entertains the crowd with a strip tease and drops her top just as Lisa’s father arrives home. Everyone is thrown out and a family fight ensues, the argument ending with Lisa receiving a slap from her father.

“She turned my father against me,” Lisa complains to Johnny, “And now they’re trying to keep me away from you.”

In the next scene, Adriana washes ashore and we find out (after an amusingly stylized flashback) that she is the only survivor of a storm at sea. When she finally awakens in the hospital, she is given the tragic news that her husband has drowned.

At the reading of the will, Lisa is awarded a trust fund. One million dollars will be hers on her 25th birthday or, if she chooses to marry, she will receive the funds immediately. The only condition is that Adriana must approve of her choice of husband. Adriana does not approve of Johnny.

With dollar signs in his eyes, Johnny continues to manipulate Lisa, “I don’t give a damn about the money or anything. What gets me is everybody gushing about poor Adriana. If it was my father she’d killed, I’d make her pay for it.”

Their weapon of choice? Sleeping pills laced with LSD.

Lisa suggests she and Adriana spend more quality time together. While on a drive to the coast, Adriana (under the influence of her tainted medication) has another freak-out. Johnny appears on the side of the road and, with Lisa’s help, drags Adriana towards a cliff. With colors whirling and lights flashing, she manages to escape, but no one believes that Lisa and Johnny tried to kill her. Her psychiatrist thinks her wild stories are simply the result of hysterical grief—a widow unable to deal with the death of her husband.

Lisa, who is feeling guilty about gaslighting her stepmother, agrees to put Adriana through the ringer one last time. On a particularly dark and stormy night, Adriana takes a sleeping pill and immediately begins tripping. A tape-recorded message (You killed my father. You’re going to die.) helps push Adriana to the brink of insanity. Colors and patterns dance across Adriana’s chi-chi bedroom set as images of Johnny beckon her to jump from the balcony. Lisa keeps her from jumping, but the damage is already done.

Adriana’s trip was so severe that she can’t recall her past (including her marriage to Charles or his death) and must be institutionalized. “Maybe there’s no perfect murder,” Johnny muses, “but I think we figured the perfect freakout.”

Once Adriana is legally declared incompetent, Johnny and Lisa get hitched in a bikini-clad backyard blowout. Lisa is shocked when Johnny suggests a four-way on their wedding night and kicks him out when he calls her, “a square, a cube, a jerk”.

Lisa tells Frederick the whole sorted scheme. Determined to help Adriana, he comes up with the most outrageously cockamamie scheme in cinema history. “Suppose she relived the part of her life she’s trying to forget?” To cure Adriana of her acid-induced amnesia, he plans to, “Write a play based on her experiences, then convince Adriana to play herself.”

At a read through of the play, Frederick and Lisa watch expectantly as Adriana performs a monologue from the play in which her character wistfully reminisces about her husband who was killed in a shipwreck. Adriana doesn’t crack. As rehearsals continue, she gets occasional flashes of her former life, but continues to work all the way up until opening night.

As Adriana performs the movie we’ve been watching for an appreciative audience, Lisa frets backstage, “She has no reaction at all. It’s useless. It’s not going to work!”

As Adriana begins the third act, you’d think she would’ve figured something out by now. She’s performing on a set that’s an exact replica of her own bedroom! Desperate, Frederick decides to pull out all the stops. As the psychedelic stage effects begin, he plays the same tape recording Lisa and Johnny used to push her over the edge: You killed my father. You’re going to die.

Turner really chews the scenery as Adriana relives her freak-out and finally remembers her past. Lisa shatters all sense of verisimilitude and takes the place of the stage actress playing her. “It was Johnny and me. It was us,” she confesses. “With drugs… We did it.”

Upon hearing this, Adriana lets loose with a particularly memorable bitch slap and then shrieks, “Oh, my God. I’m not mad. I’m not mad!” The audience applauds wildly as the curtain comes down. Meanwhile, Johnny has hit rock bottom with a little help from the Queen Bee. He pours an entire vial of LSD into a bowl of sugar cubes and begins to pop them like candy. Vivid colors and images of death haunt him as be begins a fatal acid trip.

With Frederick and Lisa as her escorts, Adriana exits the theatre surrounded by appreciative fans and enthusiastic members of the press. For an actress, this is perhaps the ultimate happily ever after. She gives a queenly wave as her chauffeur driven car pulls away.

In conclusion: Lana Turner always strived to look her very best onscreen. As with many actresses of Turner’s era, the veneer of Hollywood glamour was helped along with diffused lighting and careful costume choices. In The Big Cube, there’s plenty of soft-focus to keep Lana looking her best, but some of the outrageous costumes by Travilla are truly a sight to behold. In one scene Lana appears in an ornate gold caftan. But as unflattering as some of the gowns are, they can’t compare to the towering hairpieces she burdened with. The various curls, braids and bouffants look all the more ridiculous since none of them come close to matching Turners own blonde hair.

The Big Cube marked one of Lana Turner’s final starring roles. It may seem like an inauspicious way to wrap-up a Hollywood career, but several other leading ladies were making similarly themed projects around the same time. Academy award winner Jennifer Jones was featured in Angel, Angel, Down We Go (1969) and two-time Oscar winner Shelley Winters played the mother of twenty-something tyrant Christopher Jones in Wild in the Streets (1968).

George Chakiris won Oscar gold in 1961 for West Side Story, but after The Big Cube, the majority of his roles came from television guest appearances. 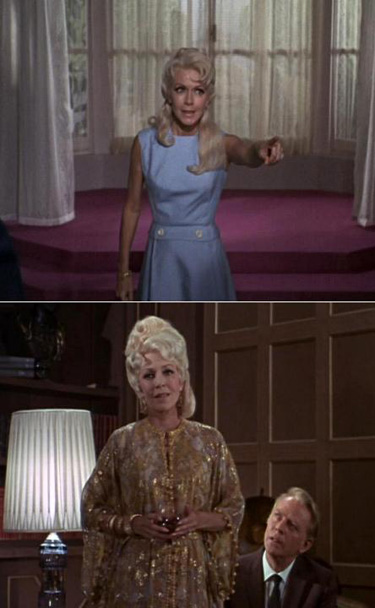