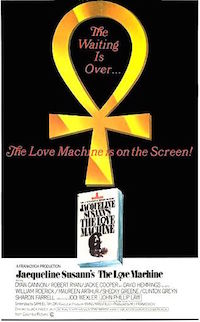 The waiting is over… The Love Machine is on the screen!

With elevator musak as her back-up, Dionne Warwick sings the theme song to The Love Machine (1971). As John Phillip Law walks through the streets of New York, the lyrics helpfully spell out his character’s psychological profile, “Where the winter winds have blown — Walks a man called Robin Stone — He will always walk alone”.

What it’s all about: A newscaster for the local IBC affiliate, it’s clear that Robin Stone (the love machine of the title) won’t be winning an Emmy anytime soon when he introduces a human interest story on spring fashion. “What’s it been like in New York today? Well, we’ve had our share of assorted disasters,” Like this movie perhaps? “and yet we’ve had our bright moments too.”

More musak accompanies a montage of designer outfits courtesy of Moss Mabry. It boggles the mind that clothes so ridiculously awful could have ever been considered fashionable. Robin flirts with a pretty blonde model in an onscreen interview. When he asks her name, ingénue Jodi Wexler replies, “Amanda…just Amanda, that’s all there is.”

“That’s all you need.” Clearly bowled over by his sparkling wit, Amanda goes home with Robin and sleeps with him.

When she attempts to leave in the middle of the night he smacks her around. “When you sleep with me, you stay with me. You don’t leave. Nobody leaves me. Nobody.”

The next day, while covering her bruises with make-up, Amanda tells photographer and gay confidant Jerry Nelson (David Hemmings with an awful beard) of her fabulous evening with Robin. “I can handle men so beautifully when I’m not involved. It’s different when you care. I’m in love with him Jerry.”

In a meeting with network president Greg Austin (Robert Ryan) Robin is promoted to anchor the evening news as well as run IBC’s news division. Office tramp and publicity gal Ethel Evans (Maureen Arthur), whose first entrance is appropriately preceded by the sound of a flushing toilet, suggests that Robin get some new publicity photos.

“Jerry Nelson will take care of that. Trouble is he only wants to shoot me in the nude.”

“Maybe I could hold the flashbulb.” she quips. He turns her down, making Ethel the only woman in the movie that he doesn’t sleep with.

As he rockets up the corporate ladder, Robin puts the brakes on his relationship with Amanda. When she gives him an ankh pinky ring he asks, “What comes next, a little gold leash?” Soon he’s back to his womanizing ways while Amanda receives the cold shoulder.

As the spokesmodel for the show’s sponsor, Amanda stars in a commercial wearing a red vinyl trench coat trimmed with feathers. The ad is filled with psycadelic lighting and video effects as well as some more memorable Mabry fashions. “From Faberge, the fragrance of Amanda.”

“Xanadu,” Amanda whispers at the camera. Is that supposed to be the name of the perfume? The commercial is so vague and artsy it’s impossible to tell.

At an after party, Robin shows up with another girl. Distraught, Amanda agrees to go home with Christie Lane. With his new show a success, Christie promises to give Amanda anything she wants. What she wants is Robin Stone.

Unable to keep it in his pants, Robin unwisely beds Judith Austin (Dyan Cannon) his boss’s wife. While they’re screwing around, Greg has a heart attack. With her husband in intensive care, Judith has power of attorney. She decides that Robin will run the network while she and Greg are in Europe during his recovery.

Amanda’s toxic relationship with Robin has finally become too much to bear, she flips out and Jerry later finds her dead of an overdose.

With his good girl dead, Christie Lane sets his sights on bad girl Ethel Evans. When he questions her principles Ethel sums up her ideals with this simple statement. “When I ball a guy it’s because I dig him.” Imagine that catchphrase on bumper stickers across America.

After Robin hears of Amanda’s suicide he goes on a drinking binge and picks up a hooker in Times Square. When “Amazon woman” takes off her brunette wig revealing long, blonde, Amanda-like hair he’s turned off by the resemblance and changes his mind. When she questions his masculinity Robin flies into a rage and beats the crap out of her.

Worried about his friend, Jerry attempts to get to the root of the problem. “I know that what happened to Amanda must have had a terrible effect on you. Why in God’s name did you have to go out and beat up a hooker?”

Law finally musters up a certain degree of emotion and answers, “I don’t know. I honestly don’t know.” In exchange for an alibi, Jerry asks Robin for a personally inscribed slave bracelet.

Greg and Judith return from Europe. She’d like to resume her extramarital affair but Robin brushes her off like all the rest. Late one night she finds him frolicking with not one, but two girls in the shower. Deciding to get mad and get even, Judith sets fire to his bed.

When Greg wants to resume his presidency of the network, Robin throws a Diva fit. “I’ve been calling every shot around here for a long time. I’m not going to start asking your permission for every move I make. If that’s what you want, get yourself a boy.”

The action then shifts to the West coast. Robin runs into Judith at the Hotel Bel-Air. Deciding it’s in his best interest to make amends, he invites Judith to accompany him to a party that Jerry and his boyfriend are throwing. Later that night after all the guests have left, Judith finds Jerry’s special bracelet. After reading the inscription, she plans to use the gossip that Jerry and Robin are lovers to exact her revenge.

“I’m gonna see to it that you are totally unemployed, off the network, out of television completely and I’m the one that can do it. Oh boy, won’t the scandal sheets love knowing about the two of you.”

Jerry shuts her up with a well deserved bitch slap and, in an attempt to get the bracelet back, a hilarious fight breaks out. Kicking, biting and hair pulling. As they chase Judith around the house every prop and piece of furniture becomes a projectile weapon. Not even the Three Stooges could’ve come up with something this zany.

All the ruckus brings the police to their door and everyone is hauled down to the Beverly Hills Police Department. When they’re released they go their separate ways, including Robin who walks away… alone.

Suddenly, in what looks like leftover footage from the start of the movie, Robin is walking along New York’s lower east side. Did he walk all the way back to the east coast? Did he lose his job? Is he working for a new network? Fox News perhaps?

The end credits roll as Dionne Warwick starts up with that theme song again.

In conclusion: Author Jacqueline Susann was quite unhappy with The Love Machine despite the fact that she agreed to a cameo and her husband also produced the movie. She disliked most of the casting choices with the exception of Shecky Greene and Robert Ryan.

Three weeks into shooting The Love Machine, original leading man Brain Kelly (TV’s Flipper) had to be replaced after a serious motorcycle accident. Production resumed when Law was miscast in the part of Robin Stone. His wooden screen presence wasn’t helped by the fact that the studio wouldn’t pay for new costumes. Law, who was several inches taller than Kelly, had to wear his ill-fitting suits. 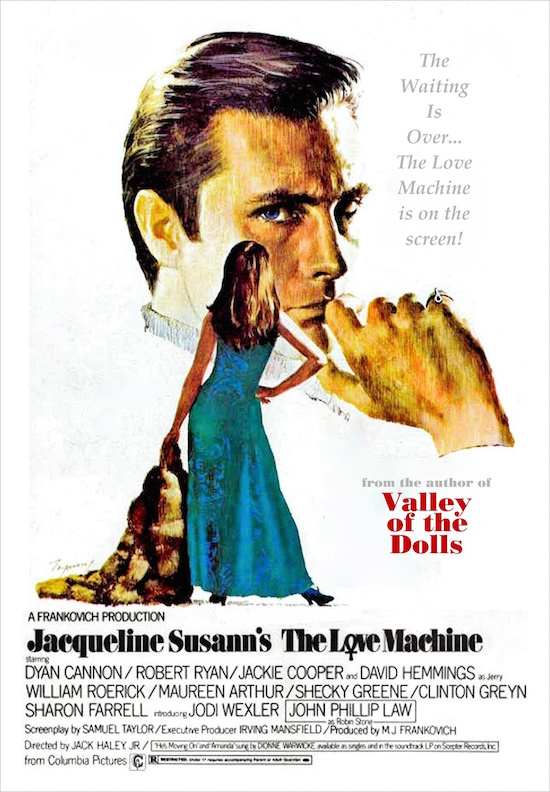